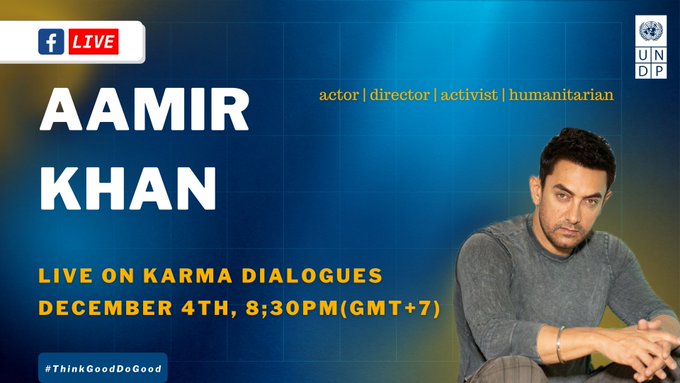 New Delhi : One of India’s most popular actors, Aamir Khan, is set to star on a whole new stage.

Khan is going to be a special guest on the UN Development Progamme’s (UNDP) Karma Dialogues series, this Friday 4 December. The special program kicks off at 7 p.m, live India time, and can be watched on UNDP’s zoom, Facebook Live or YouTube channels.

The Karma Dialogues – that debuted last week – is a series of conversations with inspirational leaders, innovators, and trailblazers, who have persevered in the face of challenges, to achieve success, and while doing so are changing the world for the better. It aims to provide a voice and vision that can help empower and motivate people to do good, despite the challenges.

“‘Karma’ speaks to destiny, a journey of cause and effect, across space and time. Our past and current actions impact future existence; it reminds us to be mindful that our ideas and actions have consequences,” said Kanni Wignaraja Assistant Secretary-General and Director of UNDP’s Regional Bureau for Asia and the Pacific. “In the best of these ideas and actions, comes the ability and belief in being able to play even a small part in influencing outcomes for the greater good.”

Aamir Khan embodies that spirit of striving for the greater good. As a top-ranked, influential actor, director, filmmaker, and television talk-show host, his work over the decades exemplifies the struggles facing society every day. And he has succeeded in making the ordinary extraordinary.

“When I came into the industry, I was a lone ranger, trying to do films that I believed in. I was constantly swimming against the tide. Now the tide has changed,” said Khan.

His television show Satyamave Jayate that probed sensitive social issues, in India – such as rape, domestic violence, untouchability and honor killings – drew hundreds of millions of viewers.  The programme motivated social movements, and helped trigger amendments to laws, and acts, as well as changes in policies.

Following the success of the show, Aamir Khan set up the Paani Foundation, in 2016, an innovative community driven initiative on water conservation. The foundation has been working in rural areas – in the Western state of Maharashtra – to tackle drought and bring prosperity to thousands of villages.

For more information on the Karma Dialogues, and recordings of past sessions, click here.