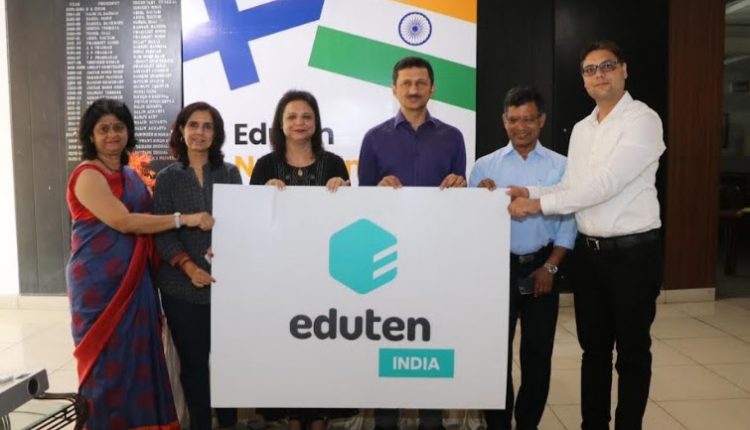 Chandigarh: Eduten, Finland’s number one math learning platform, today announced its oﬃcial launch here at a launch event held at Chandigarh Press Club here. Eduten Playground is a gamiﬁed and adaptive AI-based math system that comes with a content library of more than 200,000 pedagogically high-quality online tasks for students between the ages of 6 to 15. The hybrid launch program was attended by Finland Embassy Education Counsellor, Educationists from Finland and India along with Principals of various schools from India.

Finland Math includes Eduten Playground, a gamified and AI-based exercise platform that provides a scientifically proven improvement on learning results, teacher wellbeing and student motivation. Eduten Playground is the most popular digital math tool among Finnish teachers, used in 56% of schools in Finland, which is now being introduced in Chandigarh and other parts of the country.

The hybrid event held here featured esteemed pedagogy experts from Finland. Discussion points included how to utilize the best of Finnish pedagogy in any classroom.

“We have had great success bringing the best Finnish edtech tools to more than 40 countries so far, and I’m excited to get started in India next. We have a great team in India, poised to spread Finland Math across the country fast,” said, Henri Muurimaa, CEO, Eduten.

“Eduten has received a great response from schools in India thus far. We are delighted to work with students to improve their mathematical skills using the #1 Digital Platform from Finland,” said, Avan Goel – Business Head of South East Asia.

There is a dedicated team working from Chandigarh for business development of Eduten in the region and across India. To give experience of the platform to the schools and students, Eduten is collaborating with schools for free pilots. The purpose of this project is to introduce school to Eduten Playground and study its impact on teaching and learning. Finnish pedagogy is aligned with the Indian curriculum to suit the needs of students here.

The project will take 4 weeks and includes the following phases: Teacher training: Eduten trains the participating teachers in philosophy of Finnish education and usage of Eduten Playground in their classrooms; 4 weeks of pilot use: The teachers and students use Eduten Playground as a part of normal coursework. In practice this means one lesson per week (approx. 20 to 25 exercises).

Research Pedagogical experts from University of Turku, Finland will analyze the data collected during the pilot and write a scientific study about the results. It’s benefits are enjoyed by more than 700,000 students and teachers across the world.