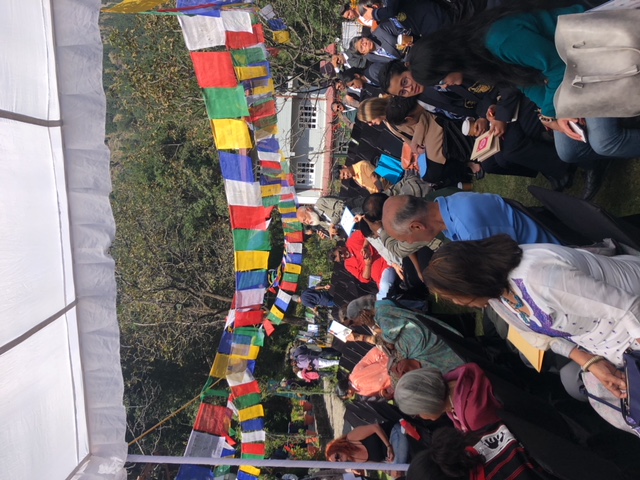 Dheradun: The first day of Himalayan Echoes of the Kumaon Festival of Literature and Arts got off the blocks to a sparkling start. The sessions focused on literary writers and contemporary themes, with a focus on issues related to the hills, incorporating local perspectives.

Stephen Alter was in conversation with Rudy Singh. Stephen’s fictionalized biography of Jim Corbett was the centre-piece of discussion. Stephen spoke of Corbett’s personal life and the person that he was and that not only was he a very accomplished naturalist but also a great writer which is why we get these exciting stories of the wildlife in Kumaon. Stephen also mentioned that Corbett was conscious of his precarious place in the social strata of the Raj, even though he had the amazing ability to connect with vast swathes of people.

Shobhaa De was in conversation with Festival Director, Janhavi Prasada. In a scintillating conversation they spoke about controversy and about fearlessly voicing opinion. Shobaa De has used her writing prowess to encourage openness, daring and to get over hypocrisy and constraints of social mores. She also highlighted how fiction is challenging as it transports you into the fabric of another person’s life.

Writer and historian, Patrick French in conversation with Anish Dayal discussed Patrick’s book Younghusband: The Last Great Imperial Adventurer. Patrick spoke of Francis Younghusband as his choice for covering vast tracts of imperial history and how Younghusband straddled the last decades of the Victorian era. The conversation touched upon appreciation of cultural gaps, the follies and charades of colonizing powers and the importance of recording history objectively.

Food writer Neha Prasada and Editor-in-chief of Penguin Random House, Meru Gokhale spoke of royal cuisines and folk traditions. Neha’s book, “Dining with the Maharajas” is a social history of the food traditions of the Royal families of India. She brought alive the importance of documenting and keeping alive old family recipes and the food heritage of India before it gets lost with time. She elaborated on the excesses and extravagances of the Royal kitchens that had a plethora of resources available to produce some of the finest in Indian Cuisine.

University of Johannesburg: The role of the library in the…

Kavita Khosa of Pure Earth in conversation with Tim Sebastian spoke of giving back to the community through empowering local people particularly women as part of environmental and social responsibility. Pure Earth products are produced in micro batches, use no plastic, no bubble wraps, but glass and paper. Vasanthi from Peoli highlighted how the hills were getting impacted by climate change and how they were endeavouring to utilize unlimited human skill to drive their design philosophy. Peoli uses the advantage of using hands and not machines to make products in a mindful manner.

There was also a far-ranging session on sustainable crafts of Himalayas followed by a book launch for Saif Mahmood’s new book ‘The Beloved Delhi: A Mughal City & its Greatest Poets’.

An intoxicating session where Saif Mahmood talks about his book, The Beloved Delhi – A Mughal City & its Greatest Poets . The entire session was laced with poetry by Saif and discussion on the same with Pushpesh Pant. He talked about the different styles of the eight greatest poets of Delhi, Secularity of Urdu and composite culture.

Early morning before the Festival kicked off, birding trails had been organized in collaboration with Strabo Pixel, as popular bird watching and bird photography club. The delegates got a chance to indulge in serious bird watching in the surrounding forests of Nainital. Strabo Pixel had also donated 30 odd bird photographs beautifully framed and which were made available for purchase at cost price with the proceeds going for charity.

There were other stalls of socially responsible initiatives like Peoli and Gangaraaga creating art, craft and encouraging local weavers. I heart café contributed with their wonderful coffee. The Festival is all about local ownership so that travel, food, tourism in Kumaon can benefit from this platform.

University of Johannesburg: The role of the library in the 21st century

iednewsdesk Oct 26, 2021
Justice and Correctional Services minister, Ronald Lamola, will be among the speakers at the inaugural Fort…

University of Tübingen: The Hertie Institute for Clinical Brain…

LETI: LETI Announces How Learning Will Be Organized in October and…