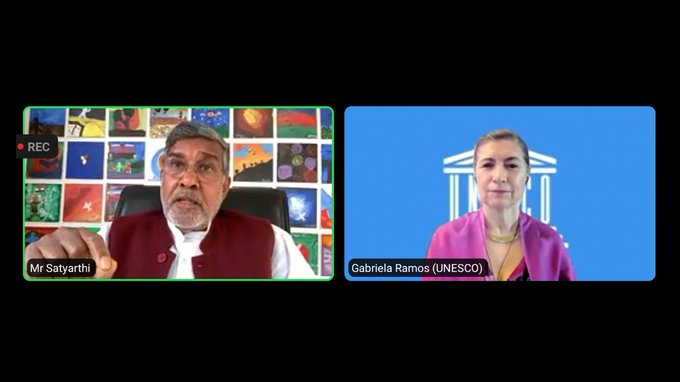 Kailash Satyarthi, Nobel Peace Laureate, is the founder of the Kailash Satyarthi Children’s Foundation which fights child slavery and forced labor, and advocates for child-friendly policies and commitment to let “children be children”. His work has resulted in the rescue of thousands of children from slavery, and in ground-breaking legislation around the world.

UNESCO’s launches its “Dialogue and Inclusion Series” with an interview of Kailash Satyarthi, Nobel Peace Laureate, relentless fighter against child labour, by Gabriela Ramos, Assistant Director-General for Social and Human Sciences of UNESCO. This timely conversation takes place while the United Nations has officially declared 2021 as International Year for the Elimination of Child Labour, and UNESCO has intensified its anti-racism and anti-discrimination programme, especially in the context of the current COVID-19 pandemic and the related rise of racism and discrimination all over the world.

Kailash Satyarthi believes that inclusion is of paramount importance, especially now in the face of a pandemic, and that collective efforts and synergies are key to successful accomplishments. 152 million children have been subjected to child labour worldwide, of which 48% are under 11 years old. 10% of the world’s children are working in mines, fields and factories. The UN Convention on the Rights of the Child remains as relevant as ever, and Kailash Satyarthi applauds the steps that have been made in international policies and laws surrounding this issue.
UNESCO is a supporter of his Fair Share for Children Campaign launched by the Kailash Satyarthi Children’s Foundation on 21 January 2021. The campaign represents a firm commitment to fight against all forms of exploitation and violation of human rights, especially among the most vulnerable in society including children.

Mapping Research and Innovation in the Republic of Mozambique