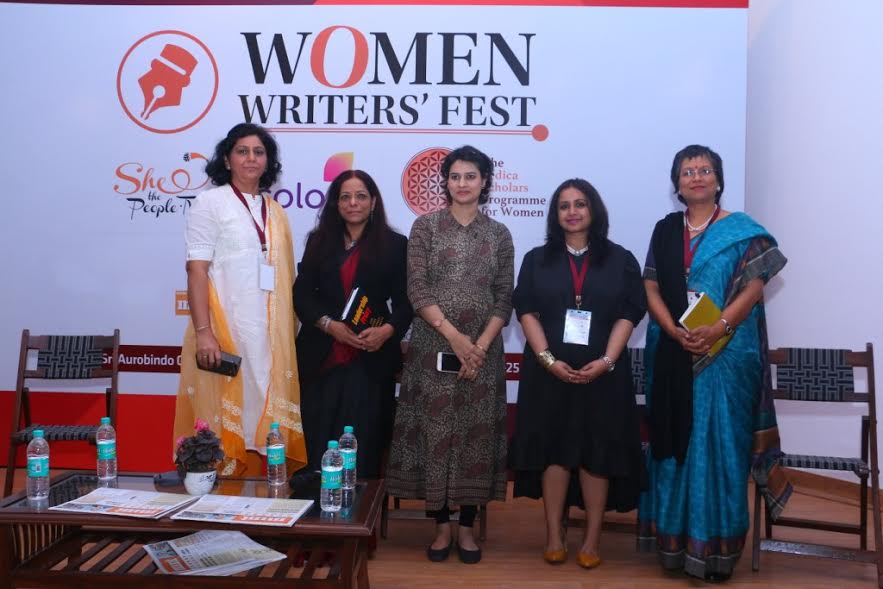 The first ever edition of Women Writers’ Festival unveiled

By India Education Diary Bureau Admin Last updated Apr 23, 2020
Share
New Delhi: The national capital witnessed the launch of the first ever Women Writers’ Festival (WWF) 2017, hosted in collaboration by  SheThePeople TV and the Vedica Scholars Programme for Women. The sponsor for the festival is Colors TV. This two-festival will be held on February 24-25 at Sri Aurobindo Centre for Arts and Communication, New Delhi (Vedica campus).
The festival opened with speeches by Shaili Chopra, Founder, SheThePeople.TV and Anuradha Das Mathur, Founding Dean, Vedica Scholars Programme for Women. Other key speakers at the event were: Monika Halan, Bahar Dutt, Aparna Jain, Veena Venugopal, Mala Bhargava, Yashodhara Lal, Urvashi Butalia, Nishita Jha, Bee Rowlatt, Amrita Tripathi, Shaili Chopra, Sonia Golani, and Shreyasi Singh. The festival was also home to Delhi’s favorite book store Full Circle, as well as photography exhibitions and food stalls spread around the festival venue.
Ms. Anuradha Das Mathur, Founding Dean, Vedica Scholars Programme for Women said, “The Women Writers’ Fest is our attempt to discover and bring together women who write on issues that impact the 21st century woman professional; issues of business, the world, the workplace and personal life. The Women Writers’ Fest is a festival of solutions and problem solving, not about rants. A festival of achievements and not about what’s not. A festival for people with stubbornly optimistic hearts.”
“We need to stop thinking of women as niche and believe in a broader spectrum of writing. The Women Writers’ Fest was an effort to bring a bigger and louder voice to women writings,” Shaili Chopra, Founder, SheThePeople.TV and Award Winning Journalist. “There are new opportunities emerging for women around the world and particularly in India. To think we have 500 million women, that screams an opportunity to tap their potential in ways that go from entrepreneurship to economic analysis. The panel on Missing Women made a great effort to talk about how the numbers can be fixed and how equal opportunities can help India take the lead,” Shaili Chopra, Founder, SheThePeople.TV and Award Winning Journalist.
After the Inauguration, the first session was titled where are the missing Women? With Poonam Barua, Milee Ashwarya, Shaili Chopra and Sonia Golani as the key speakers, moderated by Anuradha Das Mathur. This session highlighted the problems faced by women in workplaces and public life and discussed solutions to fix this imbalance.
Related Posts

Apr 16, 2022
The second session Women along the faultlines included Bahar Dutt, Anubha Bhonsle, Ruhani Kaur, Suhasini Haidar and Vedica Kant as the key speakers, moderated by Snigdha Poonam. In this session, panelists discussed how women are more vulnerable to technology disruptions, climate change and geopolitical shifts which impacts their ability to be self-sufficient.
The next session was titled Change begins at home, moderated by Bee Rowlatt. The speakers included Veena Venugopal, Natasha Badhwar, Gitanjali Surendranand, Aparna Piramal Raje discussed the ways in which women balance their personal and professional life.
The final session was The F-Word: Is The Workplace ready? which discussed how contemporary feminism can be incorporated into current workplaces. Moderated by Shreyasi Singh, the speakers included UrvashiButalia, RadhikaVaz, Aparna Jain, Ritu Kapurand & Anuranjita Kumar.
The event ended on a lighter note with a ‘Theatre for Change’ workshop by Gaurav Saini which was a powerful portrayal of relevant issues and a Stand-up Comedy performance titled ‘Why is everyone trying to irritate me?’ by the internationally renowned comedian Radhika Vaz.
The first edition of Women Writers’ Fest 2017will be concluded on Saturday, 25th February, with six panel discussions and two evening performances.
Share FacebookTwitterGoogle+ReddItWhatsAppPinterestEmail