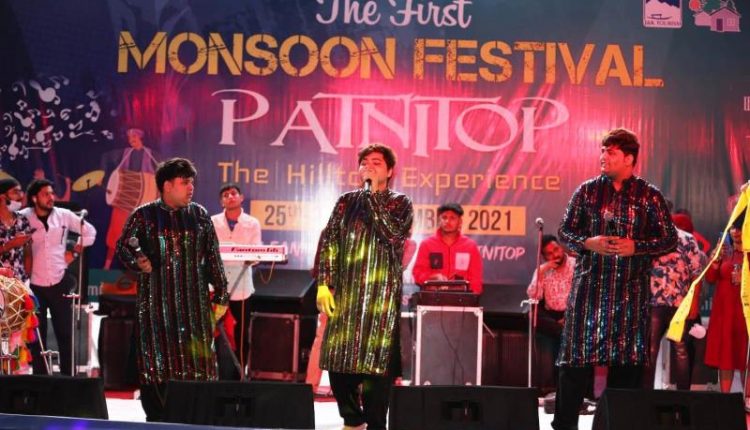 First ever Monsoon Festival concludes at Patnitop; Clocks footfall of over 6000 visitors

PATNITOP: The first-ever Monsoon Festival at the world famous hill station Patnitop concluded today with enthralling cultural and musical performances by popular artists and singers from within and outside Jammu and Kashmir.

Competitions for volleyball and kabadi were also organised by involving local youth clubs and winners were felicitated.

Organised by Patnitop Development Authority, Directorate of Tourism Jammu, District Administrations Udhampur and Ramban, the festival as part of Azadi Ka Amrut Mahotsav, exposed tourists to traditional culture, music, cuisines, handicrafts, handlooms, fun games, besides performances by Celebrity Artists from outside J&K at a single venue. It also provided a significant boost to the footfall at Patnitop, so much so that the hotels were found fully packed and which helped create revenue generation and employment opportunities for other tourism stakeholders.

Divisional Commissioner Jammu congratulated PDA & Directorate Tourism for the successful initiative, as it clocked approximately 6000 tourist footfall. The Director Tourism, Jammu said the festival shall encourage tourism in the region and promote attractions in the Patnitop circuit.

The CEO PDA, said, “The festival is aimed at promoting tourism of different kinds (leisure, adventure, religious etc) in and around Patnitop, such as Sudh Mahadev, Shankhpal, Gouri Kund, Nag Temple, Shivgali, Mantalai.”

Further, he added, “Adventure activities like Gandola at Skyview Empyrean, Zipline at Patnitop and Sanasar, trekking on picturesque routes found in this circuit have enormous tourism potential which are required to be explored and harvested. We’ll be organising more events in the coming days, making them a regular annual affair. We are looking at reaching a footfall of more than 6 lakh this year.”

It may be mentioned here that nearly 3 lakh tourists have visited Patnitop circuit since lockdown relaxations in the second week of June.

“Government schemes like Fit India, Swachh Bharat, PDA’s initiative Green Patnitop, Clean Patnitop were emphasized during the festival. We are thankful to Udhampur & Ramban Administrations, Police, Tourism Department and other government departments for their active direct and indirect support,” CEO PDA said. He made a special mention regarding the efforts made by Umesh Shan, Assistant Director Tourism NHW. Artists felicitated by the Patnitop Development Authority & Tourism Department.