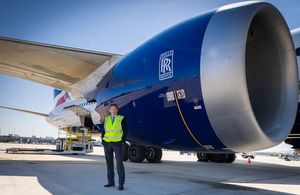 Secretary of State for Transport announces plans for a net zero transatlantic flight while in US.

By India Education Diary Bureau Admin On May 18, 2022
Share

World’s first net-zero emissions transatlantic flight could be delivered by the UK government and industry as early as next year, ushering in a new era of guilt-free flying in the coming decades.

The pioneering flight, on an aircraft powered by 100% sustainable aviation fuel, is expected to take off in 2023.

Transport Secretary Grant Shapps announced the ambitious challenge to industry during his visit to the US.

Meeting with airline executives, he invited the international sector to work closely with the UK government to deliver the demonstrator flight in 2023, paving the way for flights on the transatlantic route, and many more, to be powered solely by low-carbon fuel.

The announcement today (14 May 2022) underlines the government’s commitment to drive forward the sustainable aviation fuel industry, which has the potential to deliver significant carbon savings, improve domestic fuel security, support thousands of green jobs and put flying on a more sustainable path.

Industry estimates suggest that a UK sustainable aviation fuel industry could support up to 5,200 UK jobs directly, as well as a further 13,600 through global exports – helping to level up the UK and boost the economy. The industry estimates its annual turnover could reach £2.3 billion by 2040.

The new initiative has come out of the Jet Zero Council, a partnership between industry and government that aims to deliver new technologies and innovative ways to cut aviation emissions while supporting the UK economy.

Today’s announcement is an important part of plans to reduce emissions from aviation to net zero. Currently one of the highest single emitters of greenhouse gases, aviation is one of our biggest challenges when it comes to making transport green, but the investment and innovations such as SAF are there to make guilt-free flying a reality.

The fuel, made from waste materials, such as household waste or used cooking oil, offers greenhouse gas emissions savings of more than 70% compared to conventional fossil jet fuel when fully replacing kerosene. When combined with greenhouse gas removals, 100% SAF will enable the delivery of a net zero flight.

This trailblazing net zero emissions flight, a world first, will demonstrate the vital role that sustainable aviation fuel can play in decarbonising aviation in line with our ambitious net zero targets.

That’s not just great news for the environment, it’s great news for passengers who will be able to visit the Big Apple without increasing damaging greenhouse gas emissions.

It’s crucial that we place sustainability at the heart of the aviation industry’s recovery from COVID-19 and I look forward to working with them on this challenge, which will lower the impact flying across the Atlantic has on the planet.

Current jet fuel specifications do not allow flights to use 100% SAF, meaning SAF use needs to be complemented by additional decarbonisation measures to be fully net zero. The government is committed to accelerating the testing and approval of 100% SAF to unlock the full decarbonisation potential of this technology.

UK airlines strongly support the development of a UK SAF industry, which will play a vital role in helping our sector deliver net zero emissions by 2050, as we are committed to doing.

COVID-19 vaccine protects people of all body weights from…

This announcement will provide additional momentum to achieving this and, alongside the recent £180 million in Treasury support for the development of new UK SAF plants, demonstrates the commitment of government to making SAF a key part of the decarbonisation of aviation.

We now need to turbocharge production in order to build the initial 3 SAF plants by 2025 and UK airlines have shown real commitment to making this happen with our partnerships with Philipps 66, Velocys and LanzaTech.

We look forward to working with ministers through the Jet Zero Council to continue to explore mechanisms to attract the required private investment – in addition to a planned mandate – so we can help deliver the government’s 10% SAF uptake goal by 2030.

This is an exciting and ambitious challenge, which Rolls-Royce is ready to support having successfully tested our large commercial aero engines on 100% sustainable aviation fuel over the last year.

We have the technology to help the UK government achieve its objectives and we look forward to working closely with them to deliver this milestone transatlantic flight.

Just over 100 years ago, Rolls-Royce powered the first ever transatlantic flight and now we have the innovation and expertise to power the next generation of sustainable aircraft.

Waste based feedstocks are important as they offer an economic path to much needed volumes of sustainable aviation fuel.

We applaud the UK government’s leadership in working with industry and setting ambitious goals for the aviation sector. It is only by working together, that we will see the transformative change needed to deliver on the commitments to meet Net Zero.

Indro Mukerjee, CEO of Innovate UK, which is running the competition with the Department for Transport, said:

Innovate UK proudly supports this pioneering initiative. This flight, driven through collaboration and bold ambition, is a perfect example of how innovation can and will shape our future lives.

The speed at which this has become a reality is down to the inspiration, ingenuity and investment of all those involved.

Fuel specifications are not the only barrier preventing a higher uptake of SAF. High fuel production costs, technology risk at commercial scale and feedstocks availability are some of the challenges that government and industry are jointly working to overcome in order to build a thriving domestic SAF sector.

To do so, the government is exploring a SAF mandate and is supporting the UK SAF industry with £180 million of funding over the next 3 years, aiming to accelerate the commercialisation of SAF plants and the establishment of a fuel testing clearing house in the UK, as announced in the Net Zero Strategy.

This support will build on the progress made through previous advanced fuels grant funding programmes, such as the £15 million Green Fuels, Green Skies grant funding competition.

In addition to the £180 million funding, £400 million of funding is being made available through a government partnership with Breakthrough Energy Catalyst to drive private sector investment into the next generation of green technologies, through which UK SAF projects may seek additional capital.