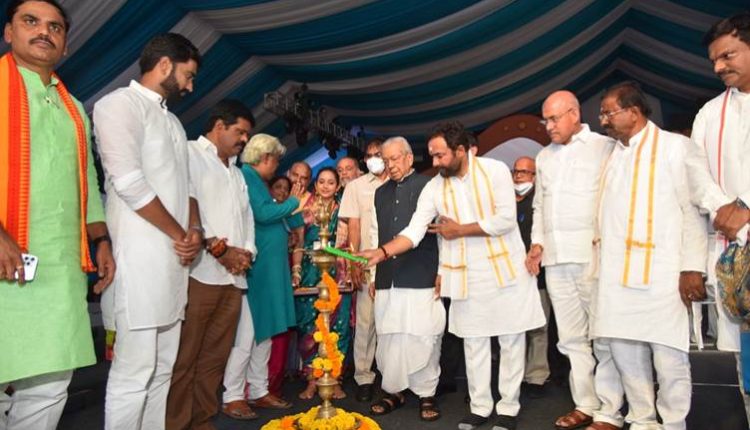 The Rashtriya Sanskriti Mahotsav had an auspicious beginning with a discourse on Bhagvad Gita by Sri Gangadhar Sastry. On the occasion,the classical Odissi dance performance by Aloka Kanungo & Taal Vadya Kacheri, a musical treat by P. Jaya Bhaskar enthralled the audience while the popular singers Sri S.P. Charan , Smt. S.P. Shailaja ,Sri Vandemataram Srinivas. and Smt. U. Sunita, regaled the gathering with some eternal melodies from the legends of Indian Cinema as a tribute to Bharat Ratna Lata Mangeshkar,Sri Ghantasala, Sri S.P. Balasubramanyam and Sri Sirivennela Sitaram Sastry.

Earlier, on Saturday, in his inaugural address, the Governor of Andhra Pradesh Shri Biswabhusan Harichandan said Festivals like Rashtriya Sanskriti Mahotsav will further strengthen our culture and traditions.

At the inaugural event, Union Minister for Culture, Tourism and Development of North Eastern Region (DoNER), Shri G. Kishan Reddy said that the Rashtriya Sanskriti Mahotsav is the flagship festival of the Ministry of Culture which aims to preserve, promote, and popularize the rich cultural heritage of India.

The Union Minister said that Rashtriya Sanskriti Mahotsav has been instrumental in showcasing folk and tribal art, dance, music, cuisines and culture of one state in other states reinforcing PM Shri Narendra Modi Ji’s cherished goal of “Ek Bharat Shreshtha Bharat”, presenting the rich culture of southern states as well as introduce the local population to the varied culture of other parts of India.

The highlight of the Mahotsav was the choreographed presentation by over 540 Zonal folk artists representing various states of India and 280 folk artists from Andhra Pradesh, who exhibited the spirit of ‘EK Bharat Shsretha Bharat‘ through a colorful cultural extravaganza as the opening acts  making the Mahotsav cherishable for a lifetime. Spellbinding performances by drummers from all Zonal Cultural Centers and choreographed folk martial arts by artists drawn from all parts of India on the second day, were the hallmark of the event.

The Mahotsav also saw brisk sale of the handicrafts  from the Artisan exhibition stalls set up in the colorful Aangans representing each Zonal Cultural Centre as well as the State of Andhra Pradesh. The public also relished the cuisines, both local & from other states, organised through the Food Festival where 30 cuisine stalls were installed. About 140 artisans from ZCC were showcasing their products in the Aangans while 40 artisans of Andhra also made part with a special Aangan prepared for them.

A one day Literary Seminar on the theme of ‘Godavari Districts Literary & Cultural Heritage’ was also organised by the Adikavi Nannaya University as part of the Mahotsav .

The Rashtriya Sanskriti Mahotsav at Rajahmundry truly showcased the rich heritage of the Southern states and introduced the local population to the varied culture, craft & cuisine of the other parts of India on one platform and place. To ensure maximum participation of the general public the entry was kept free to the Mahotsav.

The second and third leg of RSM will be held at Warangal and Hyderabad on 29th-30th March and 1st-3rd April respectively.