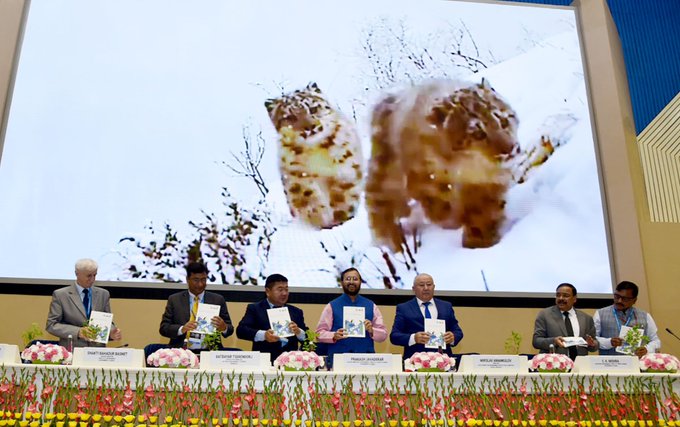 Snow Leopard enumeration of the Nation, which is the first of its kind, has been developed by scientific experts in association with the Snow Leopard States/UTs namely, Ladakh, Jammu & Kashmir, Himachal Pradesh, Uttarakhand, Sikkim and Arunanchal Pradesh.

Giving the key note address at the Inaugural session of the 4th steering committee meeting of the Global Snow Leopard & Ecosystem Protection (GSLEP) Program, today at New Delhi, Shri Javadekar dwelt upon range countries working collectively to conserve nature and enumerate the number of snow leopards. “We will strive to double the Snow leopards population in the world in the coming decade. This two-day Conference is important because discussions, deliberations, cooperation and learning from each other and sharing the best practices will benefit us all. Therefore, we can conserve nature in a better way and we can do positive work collectively”, stated the Environment Minister.

The Minister further informed about India’s success in tiger population with 2967 tigers i.e. 77 per cent of world’s tiger population residing in the country, wherein 26000 cameras were used to enumerate the near exact number. India is also home to 500 plus lions, 30000 plus elephants, 2500 plus single-horned rhinos.

Shri Javadekar also expressed confidence that the deliberations will be successful in chalking out practical program and lead to winning the battle against climate change by preserving and improving nature and by multiplying the epitome of ecology that includes Leopards, Tigers, Lions, Elephants, Rhinos and all animal kingdom. The Minister said “We must start thinking about capacity building, livelihood, green economy, and green pathway even in the Snow Leopard areas of the Himalayan range and cross country cooperation. This forms the basis for all Snow Leopard range countries.”

Speaking at the Inaugural session, Secretary, MoEFCC, Shri C.K. Mishra also laid stress on the need for awareness and understanding value of Snow Leopard for the ecosystem. He said “These conferences provide an opportunity to learn about the best practices of other countries. Discussions should center around habitat and ecosystem. Better ecosystem and creating better habitat is what we should strive for”.

It is noteworthy to mention that Snow Leopard is found in 12 countries. They are India, Nepal, Bhutan, China, Mongolia, Russia, Pakistan, Afghanistan, Kyrgyzstan, Kazakhstan, Tajikistan and Uzbekistan.

The two day international meeting of GSLEP Program is being organized by the Ministry of Environment, Forest and Climate Change at New Delhi on 23-24 October 2019.

Microsoft will be carbon negative by 2030