New Delhi: The necessity for focusing on supporting interdisciplinary problems, solution-centric and translational research, and increasing the scope for participation of industries and startups and new ideas, aiming towards Atmanirbhar Bharat’ was underlined at the Fund for Improvement of S & T Advisory Board (FISTAB) Meeting on January 22, 2021.

“The scientific institutions are critical cradle of innovation and knowledge creation, and the development of scientific infrastructure is crucial for advancement of a nation with ease of access and greater emphasis for their optimal utilization,” said Prof Ashutosh Sharma, Secretary, Department of Science & Technology (DST) at the meeting organized through webinar. He added that it was important to focus on better use of resources for optimum use of productivity.

The meeting, which discussed the need to create an ecosystem towards exploring academia-industry link-ups, involvement of start-ups in utilization of FIST facilities, and promotion of avenues for theoretical Sciences, was chaired by Prof S. G. Dhande, Chairman FISTAB, and former Director, IIT Kanpur. It was attended by more than 15 distinguished scientists from R&D Institutions and Universities.

During the meeting, a logo of FIST was launched designed by Ms. Nikita Malhotra of Guru Nanak Dev University, Amritsar, to represent the face of FIST in a new avatar. Besides, the National Report on FIST Impact Evaluation Study and Report on Activities of FIST Program was released. The impact of the FIST Program and its associated benefits was discussed by different experts under the aegis of the Centre for Human and Organizational Resource Development (CHORD Division) of the Department of Science and Technology (DST). 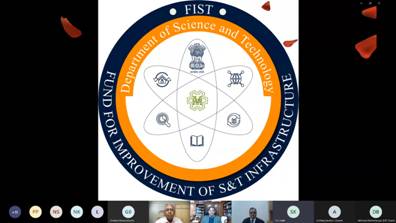 A total of 2913 FIST Projects (from the years 2000-2019) have been awarded with an investment of Rs.2953 crores across the country so far. Whereas the direct impacts of the FIST grant are tangible changes in the grantee institutions’ infrastructure that occurs at the same time and space, the study has also brought out overwhelming evidence and responses that suggest highly significant, positive indirect benefits post FIST. There have been changes in the workplace, capacity building, manpower strength (student intake and faculty recruitment), research output, and associated collaborations.

“Following 20 years of successful implementation of the FIST Program, the scheme guidelines and objectives were amended, and the focus for support was shifted to research activities preferably in the areas aligned with the National Missions and other priorities,” said S. S. Kohli, Head, R&D Infrastructure taking about the context of launch of a new logo.

The FIST programme was launched in the year 2000 to strengthen S&T infrastructure with adequate funding and associated flexibility. The 24th FISTAB Meeting that was held on 12th October 2020 highlighted that the FIST Program has played a pivotal role in the strengthening of both the teaching and research infrastructure in different academic and research institutions. However, with the shift in priorities and the S&T needs of the country, restructuring of the program was necessary in the context of the current National interests, National Missions, Sustainable Development Goals, and its scope to strengthen the vibrant economy towards building up of a self-reliant India.

National Commission for Scheduled Castes has taken into cognizance the…