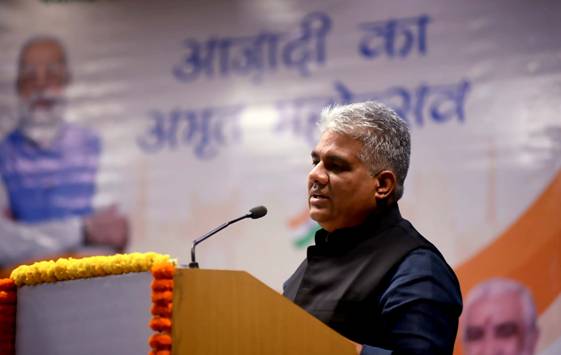 Flags off pan India ‘India for Tigers-A Rally on Wheels’

New Delhi: On the occasion of Gandhi Jayanti and heralding the Iconic Week of Azadi ka Amrit Mahotsav of MoEFCC (4-10th October 2021), Minister for Environment, Forest and Climate Change, Shri Bhupender Yadav today flagged off a rally on wheels ‘India for Tigers’ and released guidelines for ecotourism and also released guidelines for enumeration of river Dolphins in Indus and Ganges rivers.

Shri Yadav informed that during the ‘Azadi Ka Amrit Mahotsav- Iconic week’ and beyond, it is envisaged that an intensive, country wide campaign which will focus on citizen participation, to be converted into a ‘Janandolan’, where small changes, at the local level, will add up to significant national gains and help reinforce the trusteeship concept and living in harmony with nature.

The PAN India outreach activity has the twin objectives of celebrating India’s 75 years of Independence and spreading the message of biodiversity conservation under the ambit of Project Tiger and Integrated Development of Wildlife Habitats (IDWH) programme of Ministry of Environment Forest and Climate Change (MoEFCC). The rally on wheels will be organized on select dates and assigned routes and will be spearheaded by Field Directors. The field directors will start off from their designated tiger reserves. The rallies will culminate at Ranthambore, Kanha, Melghat ,Bandipur ,Similipal,Sunderbans,Manas, Palamau and Corbett tiger reserves, representing our country’s initial nine tiger reserves designated under The Project Tigerin1973.

All 51 tiger reserves will be participating at landscape level and myriad of events throughout the rally will see active involvement of diverse range of stakeholders and the amalgamation of events will showcase the overarching presence of tiger which is deep rooted in our culture, mythology, history, literature with an appeal to give this majestic big cat its due right to flourish in peace and safety.

Webinar on “Women in Agri-Startups: Creating Value with…

Considering the need for a participatory approach for conservation of wildlife and its habitats, the guidelines emphasizes the engagement of local communities in a manner that enriches local economies and encourage sustainable use of indigenous material though financial viable value chains to help local communities become ‘Atma Nirbhar’ and promotes partnership among stakeholders in development of ecotourism as well as equitable sharing of benefits with local communities.

Creation of foundation in each Protected Area and sharing of revenue with local communities has also been underscored in the guidelines. Besides, the guidelines provides for identification of ecotourism sites, zonation and making an ecotourism plan which shall be part of approved management plan/working plan for forest/protected area and tourism master plan in case of eco-sensitive zone. It also provides for monitoring mechanism at district level, state level and national level.

The Environment Minister also released a field guide for monitoring Ganges and Indus river dolphins, associated aquatic fauna and habitat.Dolphin is an aquatic apex predator and controls the aquatic system. Dolphin act as an umbrella species, whose conservation will result in well being of associated habitat and biodiversity, including humans. Dolphin enumeration is very important to delineate important conservation areas, where development can be planned with appropriate mitigation measures, and to also secure livelihoods of local communities.

So far, there is no synchronized enumeration plan, however sporadic enumerations have been done in past. First time a standardized monitoring protocol has been made and will be employed for synchronized Dolphin enumeration exercise to be undertaken in states of Assam, West Bengal, Bihar, Jharkhand, Uttar Pradesh, Madhya Pradesh, Rajasthan and Punjab. Dolphin estimation is an important process and constituent of “Project Dolphin”.

The monitoring protocol methodology includes visual monitoring of Gangetic Dolphin populations. Depending upon the width and depth of river, boat based method for Dolphin visual monitoring would use double observer survey, boat in tandem survey and single boat survey.