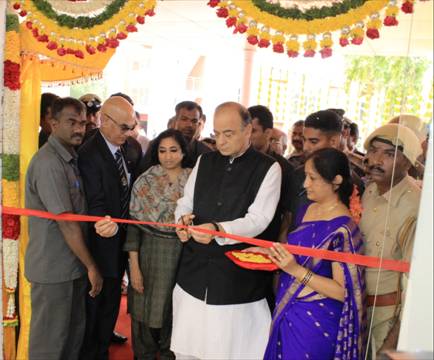 Bangalore: Inaugurating the National Academy of Customs, Indirect Taxes and Narcotics (NACIN) Campus in the Bengaluru today, the Union Finance Minister Shri Arun Jaitley said that Indirect Taxation regime in the country will play a key role and is undergoing a vital change. He said that the present multiple taxation system is transformed into the Goods and Services Tax (GST) and all the taxes are amalgamated. Speaking further, the Finance Minister said that the new GST regime will come into effect from July 1, 2017. GST is an efficient tax system which not only checks tax evasion but it also help evolving India to become very strong society.

Speaking further on the occasion, the Finance Minister Shri Jaitley said that the new Indirect Tax is a product of federal India. He added that the Centre and the States will jointly administer and decide the taxes. Coordination between taxation authority of Centre and States is also important. He said that the tax training academy NACIN, which has come-up in Bengaluru to impart training to officers of Central and State Governments and PSUs has to play a vital role.