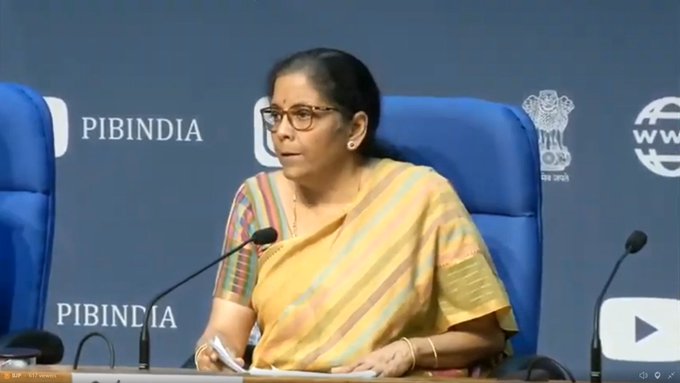 In her opening remarks during the 5th Press Conference here today on stimulus package to fight COVID-19 under Aatma Nirbhar Bharat Abhiyaan, the Union Minister of Finance & Corporate Affairs Smt. Nirmala Sitharaman referred to the vision laid out by Prime Minister Shri Narendra Modi in his address to the Nation on 12th May 2020. Quoting the Prime Minister, Smt. Sitharaman said that as a Nation, we stand at a very crucial juncture. COVID-19 Pandemic has brought a message and an opportunity. We need now to build an Aatma Nirbhar Bharat.

Smt. Sitharaman said that in order to prove the resolve of Aatma Nirbhar Bharat, land, labour, liquidity and laws have all been emphasised in Aatma Nirbhar Bharat Package. The crisis and the challenge is an opportunity to build a self-reliant India.

The Finance Minister said today’s announcement is in continuation in the series of reforms. Soon after lockdown, we came up with Prime Minister Garib Kalyan Package (PMGKP). As part of the Rs 1.70 lakh crore PMGKP, the Government announced distribution of free food grains, cash payment to women and poor senior citizens and farmers etc. The swift implementation of the package is being continuously monitored. Around 41 crore poor people received financial assistance of Rs 52,608 crore under the PMGKP. The Finance Minister also said PMGKP used technology to do Direct Benefit Transfer (DBT) to people. We could do what we did because of the initiatives taken during the last few years, she added.

In addition, 84 lakh metric tonnes of food grains has been lifted by States and also more than 3.5 lakh metric tonnes of pulses has been dispatched to various States. And for this, Smt. Sitharaman appreciated the concerted efforts of FCI, NAFED and States, giving pulses and grains in huge quantities, despite logistical challenges.

Announcing the 5th and last Tranche of measures towards Government Reforms and Enablers, Smt. Sitharaman detailed seven measures for providing employment, support to businesses, Ease of Doing Business, and State Governments as well sectors such as Education and Health.

The Government will now allocate an additional Rs 40,000 crore under MGNREGS. It will help generate nearly 300 crore person days in total addressing need for more work including returning migrant workers in Monsoon season as well. Creation of larger number of durable and livelihood assets including water conservation assets will boost the rural economy through higher production.

Public Expenditure on Health will be increased by investing in grass root health institutions and ramping up Health and Wellness Centres in rural and urban areas. Setting up of Infectious Diseases Hospital Blocks in all districts and strengthening of lab network and surveillance by Integrated Public Health Labs in all districts & block level Labs & Public Health Unit to manage pandemics. Further, National Institutional Platform for One health by ICMR will encourage research. And implementation of National Digital Health Blueprint under the National Digital Health Mission.

PM eVIDYA, a programme for multi-mode access to digital/online education to be launched immediately. Manodarpan, an initiative for psycho-social support for students, teachers and families for mental health and emotional well-being to be launched immediately as well. New National Curriculum and Pedagogical framework for school, early childhood and teachers will also be launched. National Foundational Literacy and Numeracy Mission for ensuring that every child attains Learning levels and outcomes in grade 5 by 2025 will be launched by December 2020.

Minimum threshold to initiate insolvency proceedings has been raised to Rs. 1 crore (from Rs. 1 lakh, which largely insulates MSMEs). Special insolvency resolution framework for MSMEs under Section 240A of the Code will be notified soon.

Decriminalisation of Companies Act violations involving minor technical and procedural defaults such as shortcomings in CSR reporting, inadequacies in Board report, filing defaults, delay in holding of AGM. The Amendments will de-clog the criminal courts and NCLT. 7 compoundable offences altogether dropped and 5 to be dealt with under alternative framework.

Ease of Doing Business for Corporates
Key reforms include:

Centre has decided to increase borrowing limits of States from 3% to 5% for 2020-21 only. This will give States extra resources of Rs. 4.28 lakh crore. Part of the borrowing will be linked to specific reforms (including recommendations of the Finance Commission). Reform linkage will be in four areas: universalisation of ‘One Nation One Ration card’, Ease of Doing Business, Power distribution and Urban Local Body revenues. A specific scheme will be notified by Department of Expenditure on the following pattern:

Unconditional increase of 0.50%
1% in 4 tranches of 0.25%, with each tranche linked to clearly specified, measurable and feasible reform actions
Further 0.50% if milestones are achieved in at least three out of four reform areas
The Finance Minister concluded by providing a breakup of the stimulus measures provided so far in order to become Aatma Nirbhar Bharat.

UNIVERSITY of WISCONSIN–MADISON: Questions sought for Division of the…