The fourth-year forensic science student at U of T Mississauga has conducted experiments showing abrasive blasting of a specialized powder over a surface is more effective at revealing fingerprints than the conventional dusting method.

Her study, part of an advanced independent project course, also found the innovative method to be more efficient and economical.

“This has the potential to be a viable alternative to detecting fingerprints, particularly with larger crime scenes where there are time and resource constraints,” says Krebs, who is completing a double major in forensics and criminology this spring. 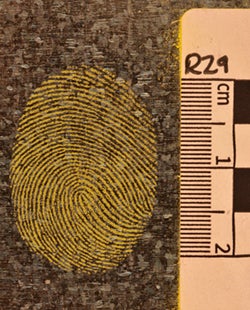 Detecting fingerprints at a crime scene typically involves using a small makeup-style brush made of soft camel hair, fiberglass bristles or feathers to gently apply a fine powder to a hard surface. The powder is usually made of aluminum, chalk, bronze, graphite or iron, and often contains fluorescence to provide a strong contrast in the resulting finger markings. The powder will stick to any traces of sweat, oil or other natural skin secretions in latent (not visible to the naked eye) prints, revealing a pattern of ridges and furrows that is unique to each person’s fingers.

While the approach is technically effective, it is painstaking work that requires a methodical pace in order to avoid damaging the delicate fingerprint residue. As a result, it can take a long time when conducted over large areas, which goes against the imperative of speed that tends to drive crime investigations.

“One of the biggest issues is time,” says Krebs, who previously completed two years of a criminology undergraduate degree at Wilfrid Laurier University. “If you have a large and complicated crime scene, it could take a long time to brush areas for fingerprints.

“Also, if the brush is too stiff, or you apply too much pressure, or the powder is not uniformly distributed on the brush, it can damage fingerprints.” 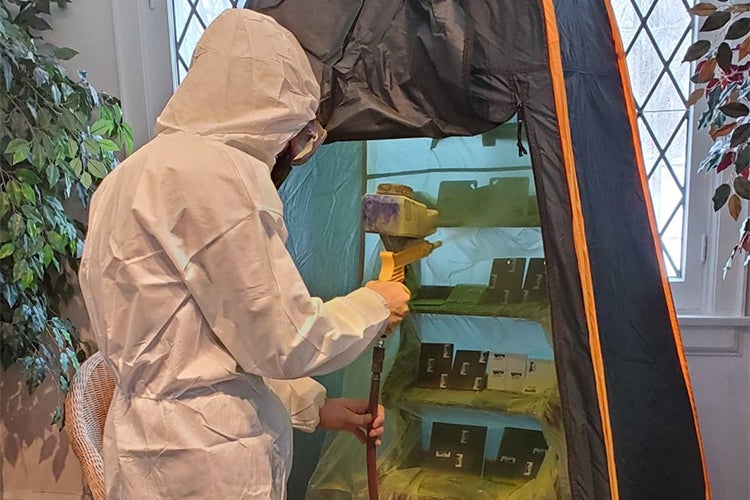 Her research took place in early February at the Crime Scene House, a campus facility for practicing forensic science investigation and documentation techniques. There, she used a gravity-feed sandblasting gun powered by an air compressor to spray fluorescent yellow cornstarch powder over each sample. Cornstarch is a proven substance for fingerprint development that is much more affordable and readily available than regular fingerprint powder. It is also less toxic, making it safer for aerosolized application.

“It comes out as a cloud – it’s just settling on the fingerprints rather than being manually applied. It is completely contactless, meaning there is much less potential to damage prints,” Krebs says.

She then photographed the fingerprints that appeared and assessed her findings. With this method, 100 of the prints were fully developed and 10 were strongly developed – in both cases providing enough details to make an accurate identification. The results equated to a success rate of 76 per cent. Krebs is now exploring opportunities to formally publish her research.

Completing the study affirmed for Krebs what she enjoys most about forensics: the ability to apply scientific knowledge to help solve crimes.

“Making a difference in the lives of individuals by finding the truth is what motivates me,” she says.