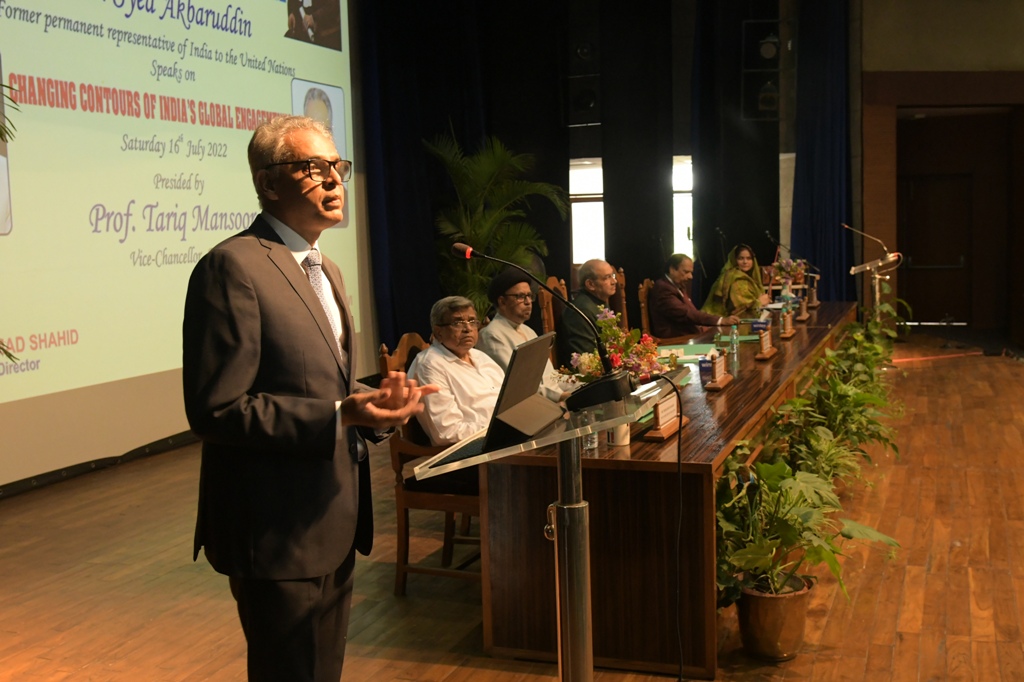 Aligarh : “In a changed world where China has become more assertive to reshape the world order, India has given up its conventional and traditional approach of diplomacy. It adopted a more vibrant, dynamic, aspirational and risk-taking approach post-2014, and got engaged with different countries including neighbours in a way never seen before”, remarked Mr. Syed Akbaruddin, retired IFS and former permanent representative of India to the United Nations, while delivering the Sir Syed Memorial Lecture-2022, an annual event of the Sir Syed Academy, Aligarh Muslim University (AMU).

Speaking on “Changing Contours of India’s Global Engagements”, he quoted several instances from his long diplomatic career and experiences of international relations-forums. “In the re-aligned global sphere and owing to the realms of cyberspace, climate change issues, energy needs, and inflation, foreign policy is no longer foreign”, Mr. Akbaruddin pointed out.

“We see global turbulence never seen in the recent past; the unipolar dominance of USA has waned and China has established its leading role in the domain of green technology, medicine, and solar energy etc.; on the other hand, insufficient market access in China, border clashes, and Belt & Road Initiative in POK suggest that India-China differences may widen in the future”, said Mr. Akbaruddin.

Delineating the shift in foreign policy of India the former UN envoy asserted: “electoral outcomes have consequences, which reflect in our current foreign policy. It is now based on ‘think big, act bold and take risk’”.

“India-Africa Summit of 2015 attended by leaders from 54 countries, inviting 10 heads from ASEAN as guests in the Republic Day parade in 2018, and recent formation of I2U2 Group, an Alliance of India, Israel, UAE and USA reflect this pragmatic shift of India’s foreign policy”, pointed out Mr. Akbaruddin.

“PM Modi visited UAE 4 times while no previous Indian Prime Minister visited this country in the last 30 years. Foreign trade agreements with UAE, and Australia and partnerships with EU countries, UK etc. have helped in reshaping our diplomatic and economic relations with leading countries of the world. The soft power of India is also being recognised with the institution of the International Day of Yoga. It is certainly helping in a robust foreign policy”, stated Mr. Akbaruddin.

Praising Sir Syed Ahmad Khan, the former diplomat said: Sir Syed had a remarkably balanced attitude rather than being carried away by emotions. Non-rigid mindset, political awareness, learned mind and understanding to bring about negotiated outcomes were the hallmark of Sir Syed. It is a prerequisite for modern-day diplomacy.

Emphasising that India is more active globally he urged the AMU students to maintain balance, aim high and prepare for leading roles in foreign policy and international relations-front for the country.

Presiding over the lecture, Prof. Tariq Mansoor, Vice Chancellor, AMU said, foreign policy is a dynamic affair, and India’s humanitarian help to Afghanistan, Nepal, and Sri Lanka etc. indicates a more active and assertive role of India in the neighbourhood and global affairs. India’s relations with Gulf countries especially UAE, and Saudi Arabia have improved a lot in the recent past.

“China is a security threat to the established world order and also trying to dominate the South China Sea at the expense of other neighbouring countries of the region”, said Prof Mansoor.

He further said, India’s firm stand on the boundary dispute has been lauded by all concerned.

Talking about the Aligarh Muslim University he said “we are a combination of modern and oriental and looking forward towards the future in a positive way”.

Prof Mansoor praised Mr. Syed Akbaruddin for his informative lecture and hoped that his continued association with AMU will benefit the students and faculty.

“AMU has helped in establishing strong relations particularly with the Islamic World”, he said.

Prof. Naqvi briefly mentioned the activities of the Academy.

The proceedings were conducted by Dr. Faiza Abbasi.

The programme was attended by Prof Mohammd Gulrez, PVC, and several other faculty members and students.