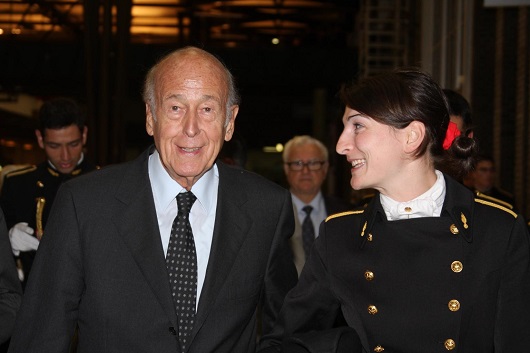 Valéry Giscard d’Estaing (X44), President of the French Republic from 1974 to 1981, died Wednesday at the age of 94 from the consequences of Covid-19. He was the last of the Polytechnicians to have held the highest office of the State.

With the death of Valéry Giscard d’Estaing (1926-2020), the line of presidents of the French Republic who were polytechnicians died out for the time being. He had graduated from the École Polytechnique in 1944. He was elected as president of France in 1974, at the age of 48, the Fifth French Republic’s youngest president until Emmanuel Macron in 2017.

During his seven-year tenure as president of France, the École Polytechnique underwent profound transformations and integrated itself into a globalized world in line with changes in France.

École Polytechnique was relocated on the Saclay plateau in Palaiseau, making l’X a pioneering institution in what was to become one of the world’s major research and innovation clusters, which today includes the campus of the Institut Polytechnique de Paris. Valéry Giscard d’Estaing visited the School’s new premises in October 1975, to soothe the debates that this transfer had caused.

It was also under his mandate that the reform of the École Polytechnique statute adopted in July 1970 was fully implemented. In order to meet the new growing needs of public as well as private sectors managers in a country that was still growing rapidly, the mission of the School was widened to “provide its students with a scientific and general culture that would enable them to occupy, after specialized training, highly qualified or management jobs of a scientific, technical or economic nature, in the civil and military bodies of the State and in public services as well as in all the activities of the nation”.

Valéry Giscard d’Estaing’s term was indeed marked by the double oil crisis of 1973 and 1979 and the entry into a lasting economic downturn. But he also championned the liberalization of the economy, opening it up to international markets and pursuing major industrial and infrastructure projects, notably the intensification of the nuclear program, the modernization of the French telecom network and the development of the TGV high-speed trains.

Echoing his major societal reforms, notably terms of women’s rights, it was also under his mandate that the first women graduated as Polytechnicians after the opening of entrance examination to women in 1972.

Deeply convinced of France’s necessarily European destiny in a globalized world, the initiator of the G7, made his last visit to the École Polytechnique on December 2, 2014 for a discussion with the students after the release of his essay “Europe, Europe’s last chance” in which he pleaded for the European integration to leap forward.

He stressed how important the School’s training and its spirit of camaraderie had been for him all along his life and called on his audience to meet the challenges of the 21st century.

“The École polytechnique, to which I owe the best memories of my training (…) is the school to which I am indebted for what I accomplished afterwards,” said the former president in his keynote address. “Because this is a scientific school and the human spirit, ultimately progresses through science », said Valéry Giscard d’Estaing.

He also emphasized the hopes he placed in the new generations of Polytechnicians by calling on them not to be afraid to hold the highest positions.

University of Cambridge: The women helping to change the story of ovarian cancer

iednewsdesk Jan 27, 2022
The works, commissioned to help address a lack of diversity in the art displayed on College campuses, are the…