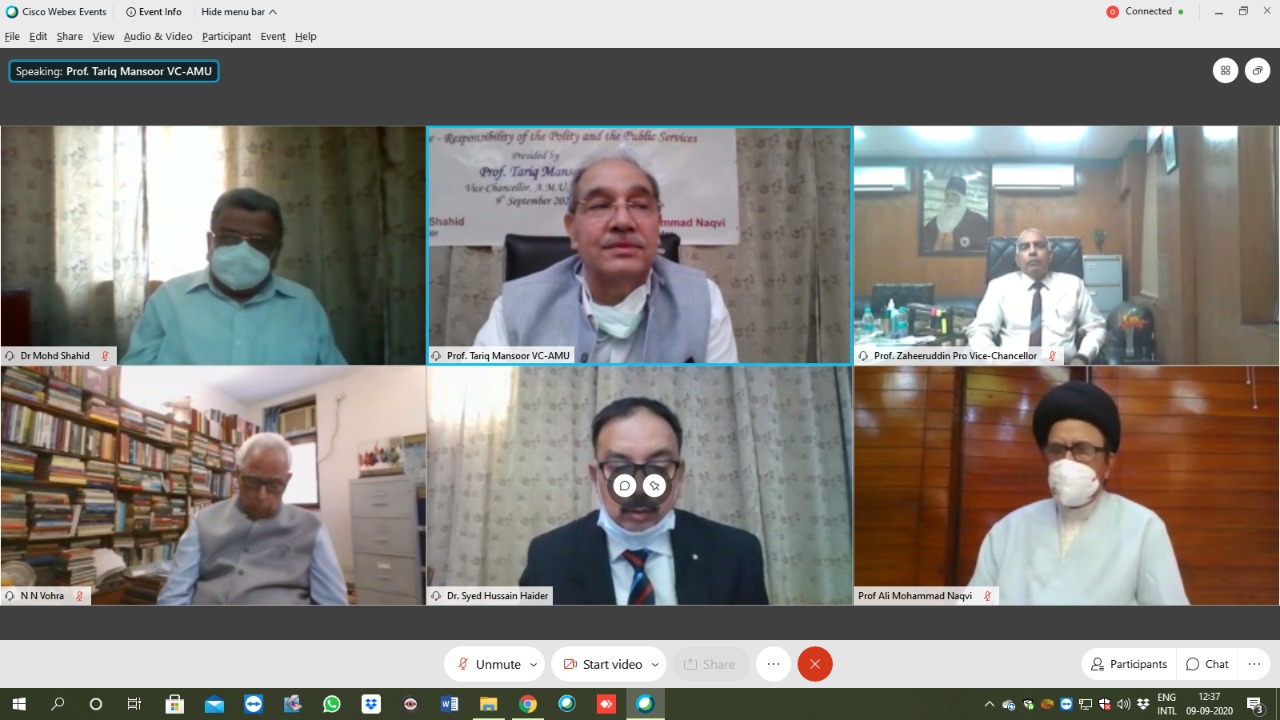 Aligarh: Former Governor of Jammu and Kashmir, Mr NN Vohra today said the chemistry for success in governance calls for a combination of committed and honest political leadership, and able and efficient public servant.

He was delivering the online ‘Centenary Year Sir Syed Memorial Lecture-2020’ on ‘Governance-Responsibility of the Polity and the Public Services’ organised by the Sir Syed Academy of Aligarh Muslim University (AMU).

“We have had visionaries in the Country like AMU founder, Sir Syed Ahmad Khan, who was a great scholar, an outstanding leader and a protagonist of Hindu-Muslim unity in India, when colonisers were trying to divide the country, Sir Syed strongly believed that the pursuit of progress was only possible through education of masses,” said Mr Vohra.

“Sir Syed criticised the influence of traditional dogma and founded the Scientific Society of Aligarh, the first scientific association of its kind in India, while launching the Aligarh Movement,” he added.

Sir Syed rationally interpreted the religious scriptures and left an indelible mark on India and pushed for educational and social reforms. He was a champion of democratic ideals and freedom of speech, emphasised Mr Vohra.

Dwelling on the achievements of the civil services over the years, Mr Vohra stressed that strict adherence to the constitution and rule of law are imperative to maintain accountability.

“It is imperative for effective polity and public services to work through transparency and consultation and promote a culture of excellence in governance characterised by integrity and highest standards of deliverance,” said the former JK Governor.

Speaking on the aftermath of the Covid19 outbreak, Mr Vohra categorically pointed out that the pandemic crisis calls for national governance and it is the government which has to act and deliver with a more broad based system.

“It is a downhearted situation, considering the number of people pushed below the poverty line after the surge in coronavirus cases brought the economy to a halt. The hardships caused to the poor, need to be mitigated at the earliest,” he emphasised.

Mr Vohra elaborated that India has come a long way from the country the British exited in 1947. Our nation has since evolved into a vibrant constitutional democracy and made rapid strides in several domains.

“India is a home to people of all religions, who speak more than 122 languages and over 2000 different dialects and since, the partition we have braved many challenges including the refugee crisis in 1947 and Pakistan’s and China’s aggression in Jammu and Kashmir and Ladakh to come this far. Be as it may, India managed development since the nascent stage as an independent country. Our renowned educational and health institutions were established in the first two decades after independence,” said Mr Vohra.

In the presidential address, AMU Vice Chancellor, Professor Tariq Mansoor pointed out that Mr Vohra, a 1959 batch Indian Administrative Service officer was the 12th governor of the erstwhile Indian state of Jammu and Kashmir. He served the former state for 10 years, which is a great achievement.

The Vice Chancellor stressed the need for having the brightest people in public service with fixed tenures at designated places.

He also spoke on the importance of both ruling coalition and strong opposition for vibrant functioning of democracies.

Prof Mansoor said, there is a need to learn from the success of many smaller states in India and replicate their efficient governance and public services in other states.