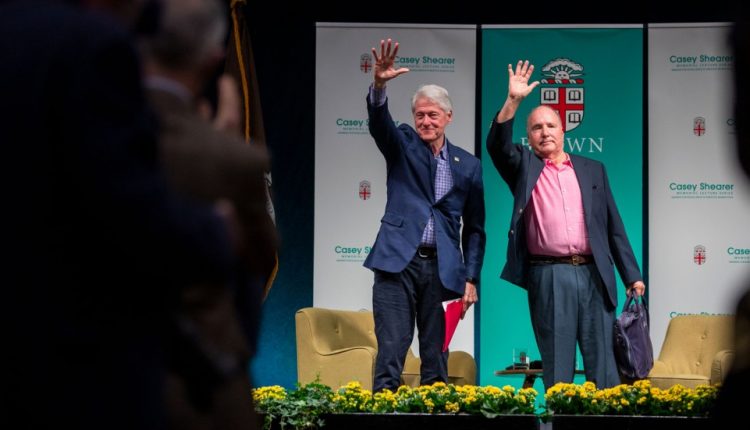 Former President Bill Clinton on authoritarianism: ‘They can’t win in the long run’

In 2007, in the last days of Boris Yeltsin’s life, Bill Clinton paid the former Russian president a visit. After spending some time reminiscing, talk turned to the future of the Russian state – and specifically Vladimir Putin, who was then in the second term of his presidency.

“I said [to Yeltsin], ‘I’m just not sure about Putin,’” Clinton recalled. “He’s very able, but I don’t think he believes in democracy. [Yeltsin] said, ‘You may be right.’”

In the two decades since leaving office, the 42nd president of the United States said he has “spent sleepless nights thinking about” whether Russia is doomed to remain under authoritarian rule for decades to come. Clinton admitted he worries about the global implications of Putin’s leadership, yet he also said he is certain of one thing: The U.S. didn’t intentionally disengage from Russia during his presidency and pave the way for Putin’s invasion of Ukraine, as some critics have claimed.

“It is not true that we did anything to isolate, humiliate or ignore Putin,” Clinton said. “That’s the biggest load of bull you’ll ever hear.”

During a conversation held at Brown University’s Pizzitola Sports Center on Tuesday, April 26, Clinton discussed global politics, climate change, writing and music as part of the Casey Shearer Memorial Lecture, a series that typically brings prominent journalists, filmmakers and creative writers to Brown in memory of a University senior who died in 2000 on the eve of his graduation. Clinton spoke onstage alongside Casey Shearer’s father Derek Shearer, who met Clinton at Oxford University and later worked with him as U.S. ambassador to Finland. Clinton, who knew Casey Shearer from infancy, noted that he spoke at Shearer’s memorial service at Brown 22 years ago.

The former president said he first became wary of Putin after a 2006 birthday celebration for Yeltsin, during which Putin expressed interest in bringing the Clinton Foundation’s AIDS program to St. Petersburg. Clinton drew up a plan that would deliver low-cost treatment to AIDS patients in the Russian city, and Putin approved all of it — except the proposed cost per care, which Putin proposed quadrupling. Clinton refused to partner with Putin, citing concerns that the higher cost would prevent the foundation from treating other high-need patients in low-income countries.

“Putin said, ‘Give me a day or two to think about it,’” Clinton recounted. “They took the plan and did their own program. He was always kind of trying to build this klepto state.”

Clinton also defended his decision to engage with China’s authoritarian president Jiang Zemin in 1998. Zemin had expressed that he was open to cooperation with the U.S., Clinton said, and at the time, Clinton felt that creating a formal strategic partnership would at least give the U.S. a legal forum in which to challenge China’s potential unlawful actions, including intellectual property theft.

“It does make a difference, even in authoritarian systems, who’s running the show,” Clinton said, alluding to current Chinese president Xi Jinping’s very different leadership style. “If I had to do it again, under the facts I was facing then, I would probably do the same thing.”

Clinton observed that both Putin and Jinping have successfully maintained control in their respective countries by “keeping the opposition weak and divided” and keeping their bases “riled up” — but he said he believes their victories can’t last.

“All these people, they can win for a while,” Clinton said. “But they can’t win in the long run, because it doesn’t make sense — as the people of Ukraine are teaching Mr. Putin every day.”

Even as Clinton gamely fielded tough questions about his geopolitical decisions, he waxed enthusiastic about his two favorite hobbies: the saxophone (he still plays, he said) and, more recently, mystery writing. In 2018, the former president teamed up with bestselling author James Patterson to write a novel, “The President Is Missing,” which he said gives the general public a rare peek into modern cybersecurity issues. The pair followed up with “The President’s Daughter,” which sheds light on how significantly presidents’ lives change when they leave office.

The former president also spoke forcefully about the importance of confronting climate change — a top concern among students at Brown, Derek Shearer noted. Clinton encouraged young people to fight for climate action by becoming involved in politics at the local level, where many far-right representatives are attempting to disrupt the democratic process by unseating those who preside over fair elections.

“A lot of people don’t even know who their state legislators are,” Clinton said. “This is something worth remembering: You can’t be an effective political citizen unless you show up every time they open the doors, and unless you support up and down people who agree with you…on the things you care about.”

When Shearer noted that countless students had written in to ask Clinton for advice on finding a career in politics, the leader warned that aspiring politicians would need a “high pain threshold” and a willingness to take criticism seriously, not personally. Yet the 75-year-old said he strongly believes that a life dedicated to improving others’ lives has more merits than disadvantages.

“All I can tell you is, if you care about people and you…want to do something that actually makes someone’s life better instead of just giving [yourself] a job and a title…it’s a wonderful way to live,” Clinton said. “Lord have mercy, I’ve had a wonderful life. I’ve had a fascinating life.”

Ahead of Clinton and Shearer’s conversation, Richard Rambuss, chair of the Department of English, presented the winners of the annual Casey Shearer Memorial Nonfiction Awards, given each year to Brown juniors and seniors who exhibit excellence in short creative nonfiction writing. The 2022 winner was Michelle Liu, a senior; second place went to junior Henry Block.

Several of the late Casey Shearer’s relatives also spoke about the Brown graduate’s legacy. Julie Yannatta, Shearer’s sister, illustrated Shearer’s fierce positivity by encouraging the 1,000-strong audience to stand up and extend their arms out as wide as possible, a stance Shearer often took.