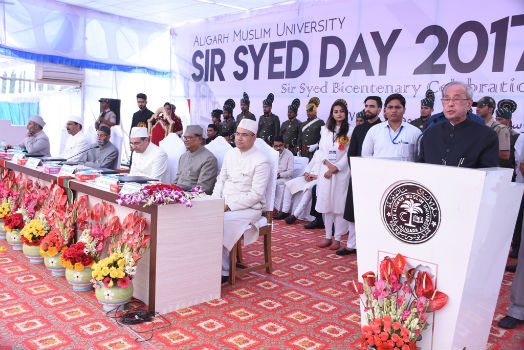 “It is a privilege to be in AMU on the occasion of 200th birth anniversary of Sir Syed Ahmad Khan, the visionary leader of India,” said Shri Mukherjee adding that Sir Syed was far ahead of his time as he thought of empowering common people with modern scientific education at a time when India was a newly colonised society and ignorance was prevailing.

Shri Mukherjee said that Sir Syed began his mission by promoting western–style scientific education by founding modern schools and journals. “Sir Syed established a school at Muradabad, the Victoria School at Ghazipur in 1863, and a scientific society for Muslims in 1864,” added Shri Mukherjee.

He further said that Sir Syed’s journey to accomplish his mission took him to founding the Mohammadan Anglo-Oriental College in 1875, which eventually became the Aligarh Muslim University.

Shri Mukherjee pointed out that in today’s world, we need to take Sir Syed’s mission forward by concentrating on innovation, research, building a knowledge based society and taking the reputation of the country to new heights.

He also pointed out that AMU is a perfect example of Indian nationalism and ethos, where students from different religions, ethnicity, linguistic backgrounds and culture integrate and work together in productive ways.

In the welcome address, AMU Vice Chancellor, Professor Tariq Mansoor said that Sir Syed changed the destiny of the nation by devoting his entire life for education.

Prof Mansoor added that the supreme interest of Sir Syed’s life was education in its widest sense as he wanted to create a scientific temperament among the common Indians.

“Sir Syed was a Messiah, who worked for education and secularism through his versatile writing and farsightedness,” said Prof Mansoor adding that Sir Syed wanted to make modern knowledge of science available to common people.

Practically launches ‘The Learning Lobby,’ a holistic, one…

Prof Mansoor said that Sir Syed was committed to the idea of pluralism and modernity to resist the forces of sectarianism and divisions. “Sir Syed believed that knowledge and education will broaden horizons to counter hatred, bigotry and narrow perspectives,” further pointed out the Vice Chancellor.

He also said that it is a matter of great satisfaction that the University Grants Commission, Ministry of Human Resource and Development has approved an allocation of nearly Rs 90 crores to AMU for the next three years, which will greatly support the ongoing projects and will help enhance various kinds of facilities in the university.

While concluding his address, Prof Mansoor said that as AMU celebrates Sir Syed’s bicentenary celebrations till October 2018; let us (AMU community) work with dedication to achieve the goal of quality education.

Justice MSA Siddqui during his acceptance speech said that AMU has always been close to his heart and he is proud to receive this award in Sir Syed’s ocean of knowledge and education. Prof Mohammad Muneer Khan from the Department of Chemistry, AMU was conferred with the Sir Syed Innovation Award – 2017 (Outstanding Researcher of the year, Science Stream).

The winners of the ‘All India Essay Writing Competition’ on the topic of “Relevance of Sir Syed in the New Millennium” also received their prizes from the chief guest and the Vice Chancellor. With a cash prize of Rs 25,000, Rajvardhan Tiwari, a BALLB student at the Chanakya National Law University, Patna bagged the first prize while Kaif Siddiqui, a BA LLB (IIIrd semester student) at Aligarh Muslim University won the second place with a cash prize of Rs 15,000. Anusha Pillay, National Institute of Technology, Raipur, has emerged third with a prize of Rs 10,000. Meanwhile, Abdul Sabur Kidwai of AMU won a cash prize of Rs 5, 000 as a state topper from Uttar Pradesh.

The proceedings of the day began with a Quran Khwani (Quranic Recitation) at the university Mosque. Prof Mansoor with senior professors and officers of the university paid floral tributes at the Mazaar (grave) of Sir Syed after the traditional ritual of ‘Chadar Poshi’.

Practically launches ‘The Learning Lobby,’ a holistic, one of the first such…