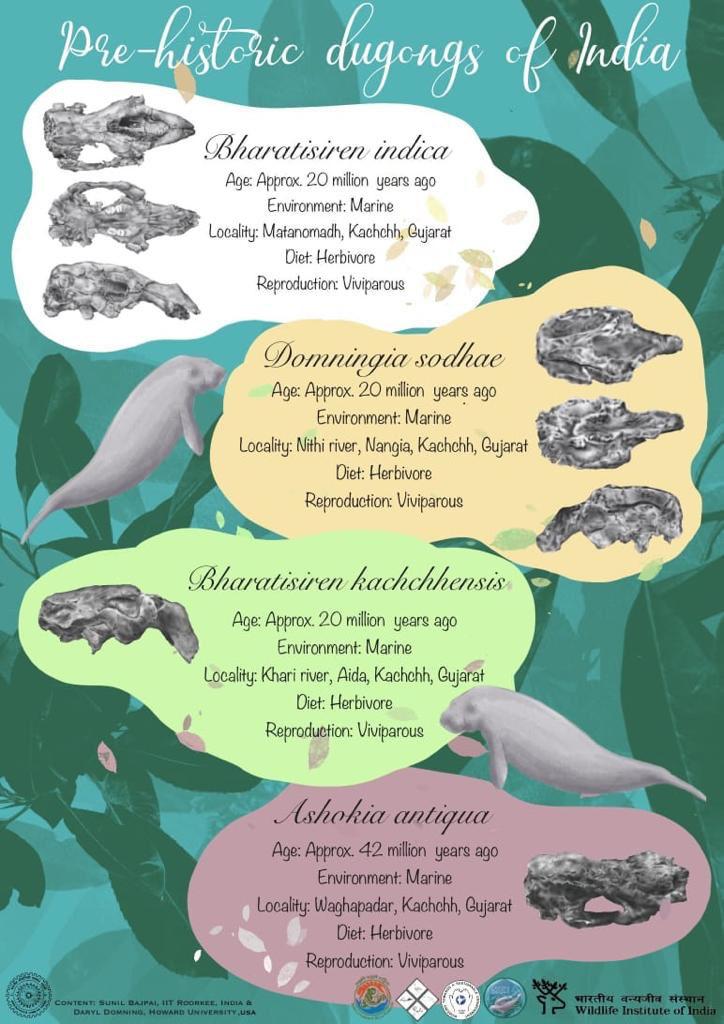 Roorkee: Sea cows, or Dugongs, are an endangered species of herbivorous marine mammals, which feed on seagrass in shallow coastal waters. Although protected in India under the Wild (Life) Protection Act, 1972, these rare animals are fighting for survival in the Indian waters including the Gulf of Kutch, the Gulf of Mannar & Palk Bay (Tamil Nadu), and the Andaman & Nicobar Islands. There is a serious danger of these sea cows becoming extinct if concerted efforts are not made for their conservation. The World Dugong Day is celebrated every year on May 28 to create awareness about this growing threat to sea cows by human activities such as the destruction and modification of dugong habitats, rampant illegal fishing activities, pollution, vessel strikes, unsustainable hunting or poaching, and unplanned tourism.

Interestingly, while there is only one species of Dugong, which thrives in the Indian marine waters today, there was an amazing diversity of these creatures in India in the pre-historic past. Studies conducted at IIT Roorkee by Prof Sunil Bajpai and his students and collaborators on fossilized remains of sea cows from the Kutch region of Gujarat show that India was home to at least 4 different species including some very primitive ones that lived in this region about 42 million years ago, and another 5 species that thrived about 20 million years ago.

“Ongoing studies show that the actual diversity could be even higher and India was a major centre of evolution and diversification in the past, not only for sea cows but also for other associated mammals such as whales”, said Prof. Bajpai, Head of the Department of Earth Sciences at IIT Roorkee.

A large number of beautifully preserved sea cow and whale fossils are currently housed at Prof. Bajpai’s Paleontology Lab in the Department of Earth Sciences at IIT Roorkee. This year, on the occasion of the World’s Dugong Day, a poster highlighting this pre-historic heritage of fossil sea cows was brought out by the CAMPA- Dugong Progam at Willdlife Institute of India, Dehradun, with inputs from Prof Bajpai.

“It is exciting to see fossil evidence that suggests India was a cradle of evolution and biodiversity in the past. I am happy that the Department of Earth Sciences at IIT Roorkee is contributing to improving our understanding of evolution.” said Prof Ajit Chaturvedi, Director, IIT Roorkee.

A tweet by the Ministry of Forest, Environment and Climate Change, Government of India said “Ancient India had four species of dugongs, the highest anywhere in the world“.

The World Dugong Day was also endorsed by the Convention on the Conservation of Migratory Species of Wild Animals, an environmental treaty of the United Nations.