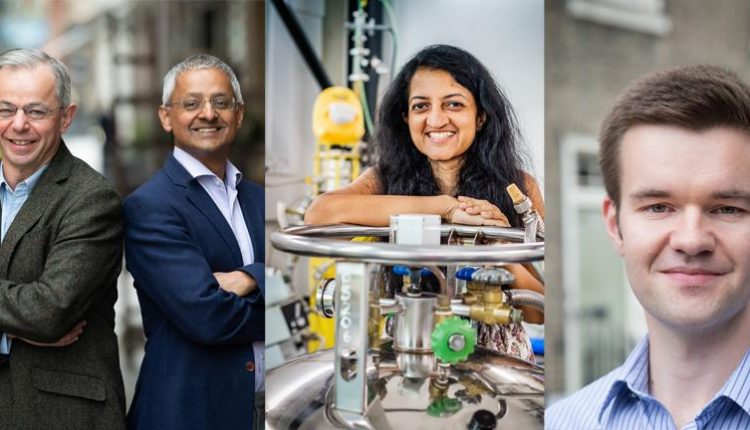 Four University of Cambridge researchers – Professors Shankar Balasubramanian, David Klenerman, Suchitra Sebastian and Jack Thorne – have been recognised by the Breakthrough Prize Foundation in recognition of their outstanding achievements.

Professors Shankar Balasubramanian and David Klenerman, from Cambridge’s Yusuf Hamied Department of Chemistry, have been awarded the 2022 Breakthrough Prize in Life Sciences – the world’s largest science prize – for the development of next-generation DNA sequencing. They share the award with Pascal Mayer, from the French company Alphanosos.

In addition, Professor Suchitra Sebastian, from the Cavendish Laboratory, and Professor Jack Thorne, from the Department of Pure Mathematics and Mathematical Statistics, have been recognised with the New Horizons Prize, awarded to outstanding early-career researchers.

Professor Suchitra Sebastian has been awarded the 2022 New Horizons in Physics Prize for high precision electronic and magnetic measurements that have profoundly changed our understanding of high temperature superconductors and unconventional insulators.

Professor Jack Thorne has been awarded the 2022 New Horizons in Mathematics Prize, for transformative contributions to diverse areas of algebraic number theory, and in particular for the proof, in collaboration with James Newton, of the automorphy of all symmetric powers of a holomorphic modular newform.

Professors Balasubramanian and Klenerman co-invented Solexa-Illumina Next Generation DNA Sequencing (NGS), technology that has enhanced our basic understanding of life, converting biosciences into ‘big science’ by enabling fast, accurate, low-cost and large-scale genome sequencing – the process of determining the complete DNA sequence of an organism’s make-up. They co-founded the company Solexa to make the technology available to the world.

The benefits to society of rapid genome sequencing are huge. The almost immediate identification and characterisation of the virus which causes COVID-19, rapid development of vaccines, and real-time monitoring of new genetic variants would have been impossible without the technique Balasubramanian and Klenerman developed.

The technology has had – and continues to have – a transformative impact in the fields of genomics, medicine and biology. One measure of the scale of change is that it has allowed a million-fold improvement in speed and cost when compared to the first sequencing of the human genome. In 2000, sequencing of one human genome took over 10 years and cost more than a billion dollars: today, the human genome can be sequenced in a single day at a cost of less than $1,000. More than a million human genomes are sequenced at scale each year, thanks to the technology co-invented by Professors Balasubramanian and Klenerman, meaning we can understand diseases much better and much more quickly. Earlier this year, they were awarded the Millennium Technology Prize. Balasubramanian is also based at the Cancer Research UK Cambridge Institute, and is a Fellow of Trinity College. Klenerman is a Fellow of Christ’s College.

Professor Sebastian’s research seeks to discover exotic quantum phases of matter in complex materials. Her group’s experiments involve tuning the co-operative behaviour of electrons within these materials by subjecting them to extreme conditions including low temperature, high applied pressure, and intense magnetic field.

Under these conditions, her group can take materials that are quite close to behaving like a superconductor – perfect, lossless conductors of electricity – and ‘nudge’ them, transforming their behaviour.

“I like to call it quantum alchemy – like turning soot into gold,” Sebastian said. “You can start with a material that doesn’t even conduct electricity, squeeze it under pressure, and discover that it transforms into a superconductor. Going forward, we may also discover new quantum phases of matter that we haven’t even imagined.”

In addition to her physics research, Sebastian is also involved in theatre and the arts. She is Director of the Cavendish Arts-Science Project, which she founded in 2016. The programme has been conceived to question and explore material and immaterial universes through a dialogue between the arts and sciences.

“Being awarded the New Horizons Prize is incredibly encouraging, uplifting and joyous,” said Sebastian. “It recognises a discovery made by our team of electrons doing what they’re not supposed to do. It’s gone from the moment of elation and disbelief at the discovery, and then trying to follow it through, when no one else quite thinks it’s possible or that it could be happening. It’s been an incredible journey, and having it recognised in this way is incredibly rewarding.”

Professor Jack Thorne is a number theorist in the Department of Pure Mathematics and Mathematical Statistics. One of the most significant open problems in mathematics is the Riemann Hypothesis, which concerns Riemann’s zeta function. Today we know that the zeta function is intimately tied up with questions concerning the statistical distribution of prime numbers, such as how many prime numbers there are, how closely they can be found on the number line. A famous episode in the history of the Riemann Hypothesis is Freeman Dyson’s observation that the zeroes of the zeta function appear to obey statistical laws arising from the theory of random matrices, which had first been studied in theoretical physics.

In 1916, during his time in Cambridge, Ramanujan wrote down an analogue of the Riemann zeta function, inspired by his work on the number of ways of expressing a given number as a sum of squares (a problem with a rich classical history), and made some conjectures as to its properties, which have turned out to be related to many of the most exciting developments in number theory in the last century. Actually, there are a whole family of zeta functions, the properties of which control the statistics of the sums of squares problem. Thorne’s work, recognised in the prize citation, essentially shows for Ramanujan’s zeta functions what Riemann proved for his zeta function in 1859.

Taking a broader view, Ramanujan’s zeta functions are now seen to fit into the framework of the Langlands Program. This is a series of conjectures, made by Langlands in the 1960’s, which have been described as a “grand unified theory of mathematics”, and which can be used to explain any number of phenomena in number theory. Another famous example is Wiles proof, in 1994, of Fermat’s Last Theorem. Nowadays the essential piece of Wiles’ work is seen as progress towards a small part of the Langlands program. Thorne’s work establishes part of Langlands’ conjectures for a class of objects including Ramanujan’s Delta function.

“I am deeply honoured to be awarded the New Horizons Prize for my work in number theory,” said Thorne. “Number theory is a subject with a rich history in Cambridge and I feel very fortunate to be able to make my own contribution to this tradition.”

For the tenth year, the Breakthrough Prize recognises the world’s top scientists. Each prize is US $3 million and presented in the fields of Life Sciences, Fundamental Physics (one per year) and Mathematics (one per year). In addition, up to three New Horizons in Physics Prizes, up to three New Horizons in Mathematics Prizes and up to three Maryam Mirzakhani New Frontiers Prizes are given out to early-career researchers each year, each worth US $100,000. The Breakthrough Prizes were founded by Sergey Brin, Priscilla Chan and Mark Zuckerberg, Yuri and Julia Milner, and Anne Wojcicki.

Oxford gets ready to welcome back university students