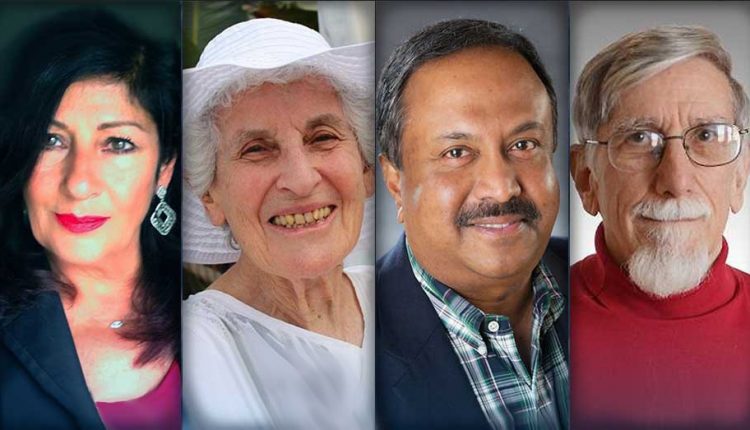 Elena Aprile, Joan Birman, Sankar Ghosh, and Robert Jervis were elected by their peers in recognition of their outstanding achievements in research.

The National Academy of Sciences (NAS) has elected three Columbia professors and one Barnard professor in the fields of physics, mathematics, microbiology and immunology, and political science into its membership, one of the highest honors that can be accorded to a scientist in the United States.

“The historic number of women elected this year [59 out of 120 new members] reflects the critical contributions that they are making in many fields of science, as well as a concerted effort by our Academy to recognize those contributions and the essential value of increasing diversity in our ranks,” said NAS President Marcia McNutt. “I am pleased to welcome all of our new members, and I look forward to engaging with them in the work of the National Academies.”

Elena Aprile is a Columbia physics professor whose research interests include high-energy nuclear and particle physics, astrophysics, gravitational waves, and cosmology. She is the founder of the XENON Dark Matter Experiment, an underground research facility in Italy that engages in experiments aiming to detect dark matter particles.

University of the Free State: Big names talk about state of…

University of the Western Cape: One in Five South Africans…

Joan Birman is an emeritus research professor in the department of mathematics at Barnard. She specializes in low-dimensional topology, and has contributed to the study of knots, 3-manifolds, mapping class groups of surfaces, geometric group theory, contact structures, and dynamical systems.

Sankar Ghosh is the Silverstein and Hutt Family Professor and chair of Columbia’s department of microbiology and immunology. His research focuses on inflammation, immune responses, and cancer. The Ghosh lab has a longstanding interest in understanding and elucidating the complexities of transcriptional regulation, with a particular concentration on the innate and adaptive immune system.

Robert Jervis is the Adlai E. Stevenson Professor at Columbia’s School of International and Public Affairs. He specializes in international politics and security policy, decision-making, and theories of conflict and cooperation. He has written numerous books, serves on the boards of nine scholarly journals, and has authored over 100 publications.

University of the Free State: Big names talk about state of media and publishing…

University of the Western Cape: One in Five South Africans Live with More Than One…

iednewsdesk Jun 24, 2022
“The use of technology plays an important role in the facilitation of teaching and learning in higher education…

University of the Free State: Big names talk about state of media and…

University of the Western Cape: One in Five South Africans Live with…

Stellenbosch University: SU holds its own in international rankings