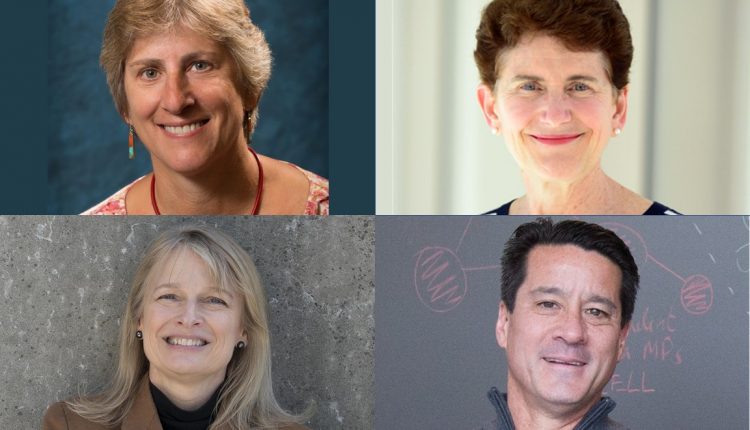 Four Penn faculty elected to the National Academy of Sciences

The new members of the Academy, honored scholars recognized for their unique and ongoing contributions to original research, include researchers from the Perelman School of Medicine, School of Engineering and Applied Science, and Annenberg School for Communication.

Four members of the University of Pennsylvania faculty have been elected to the United States National Academy of Sciences (NAS). They are Marisa Bartolomei and M. Celeste Simon from the Perelman School of Medicine, Michael Kearns from the School of Engineering and Applied Science, and Diana C. Mutz from the Annenberg School for Communication.

Bartolomei is the Perelman Professor of Cell and Developmental Biology in the Department of Cell and Developmental Biology and the co-director of the Penn Epigenetics Institute. Crossing into the disciplines of cell and molecular biology, pharmacology, and neuroscience, Bartolomei and her lab investigate genomic imprinting in mice. Specifically, they focus on the H19 gene, which is only expressed in maternal alleles, in order to better uncover the mechanisms behind imprinting and the effects of the environment, assisted reproductive technologies, and endocrine disruptors. Her lab also looks into the molecular and genetic systems behind X inactivation in mice. Her research has been published widely in journals including Nature, Nature Biotechnology, Development, and PLoS Genetics.

Kearns is the National Center Professor of Management & Technology in the Department of Computer and Information Science; he also holds secondary appointments in the School of Arts & Sciences’ Department of Economics and the departments of statistics and operations, information and decisions in the Wharton School. He is an expert in machine learning, algorithmic game theory, and microeconomics, and applies both theoretical research and experimental techniques to better understand the social dimensions of new information technology, such as its impact on privacy and fairness. Kearns is also the founding director of the Warren Center for Network and Data Sciences, which draws on researchers from around the University to study some of the most pressing problems of the digital age, as well as the co-author of “The Ethical Algorithm,” which shows how seemingly objective data science techniques can produce biased outcomes.

Mutz is the Samuel A. Stouffer Chair in Political Science and Communication and serves as director of the Institute for the Study of Citizens and Politics; she is also an affiliate of the Warren Center. She studies political communication, political psychology, and public opinion, and her research focuses on how the American mass public relates to the political world and how people form opinions on issues and candidates. She received a 2017 Carnegie Fellowship and a 2016 Guggenheim Fellowship to pursue research on globalization and public opinion, and in 2011 received the Lifetime Career Achievement Award in Political Communication from the American Political Science Association. In addition to many journal articles, Mutz is the author of “Impersonal Influence: How Perceptions of Mass Collectives Affect Political,” “Hearing the Other Side: Deliberative Versus Participatory Democracy,” and “In Your Face Politics: The Consequences of Uncivil Media.”

Simon is the Arthur H. Rubenstein, MBBCh, Professor in the Department of Cell and Developmental Biology and the scientific director of The Abramson Family Cancer Research Institute. She and her lab research the metabolism of cancer cells, tumor immunology, metastasis, and how healthy cells and cancer cells respond to a lack of oxygen and nutrients. Her work uses both animal models and cancer patient samples, and her goal is to create techniques to treat various tumors like kidney cancer, soft tissue sarcoma, liver cancer, and pancreatic cancer. Simon was the recipient of a National Cancer Institute Outstanding Investigator Award in 2017, and she has authored more than 275 articles in journals including Cell, Science, Nature, Cancer Discovery, Nature Genetics, and Cancer Cell.