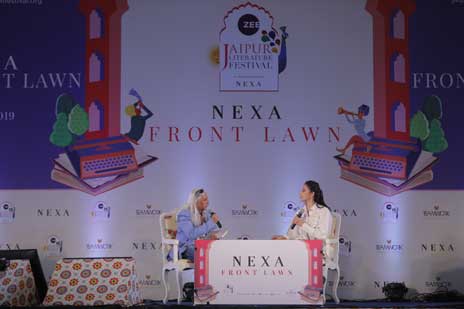 Fourth day of Jaipur Literature Festival featured towering figures from the world of literature, art and cinema, the stories of their lives and the lives of their stories

Jaipur: On Sunday 27 January 2019, the day four of this year’s edition of ZEE Jaipur Literature Festival took place at the Diggi Palace at its usual heady pace. The day’s sessions were testament to the rich variety of the multiple forms of storytelling that the Festival explores, ranging from novels and performance poetry to film adaptations and contemporary art. Furthermore, the diversity and variety of influential female voices presented by the Women Uninterrupted series painted a nuanced picture for audiences of the depth and breadth of women’s issues that countries all over the world have to tackle.

Following a musical performance of Yogi by Barnali Chattopadhyay first thing in the morning, the day’s activities kicked off with Spanish-born French-Canadian novelist Yann Martel, author of Life of Pi, talking to Indian poet-writer Jerry Pinto on the NEXA Front Lawn about life before and after his Man Booker Prize-winning novel. Martel illuminated the central thought that influences his style: “Every book I write is a conscious attempt to understand some issue… Life of Pi was an attempt to understand this curious phenomenon called faith – a wonderful mechanism unique to the human species.” He also shared his connection with India and how its monsoons “nourished” him: “India offers multiplicity, not just to foreigners but also to locals.” He also conveyed his belief that India does not hide its pain and the cracks in its society: “India is an endlessly thought-provoking and philosophically engaging country.”

During this time, at the Charbagh stage, British contemporary artist Marc Quinn tackled the gruesome matter of blood. Quinn, who famously burst into the international art scene in 1991 with a self-portrait series made of his own blood, spoke with American artist and writer Molly Crabapple, author of the memoir Drawing Blood, about his life and inspiration, as well as his upcoming global charity project titled Bloodcube – a sculpture comprising two one-metre cubes, one made of the frozen blood of refugees, the other of those people “who don’t see themselves as refugees”.

Several powerful and inspiring sessions on day four were programmed as part of the Women Uninterrupted series, once again illustrating the Festival’s commitment to providing a platform for discussions and debates that further the fight for gender equality and women’s rights.

Firstly, a brave and heart-wrenching session which launched Ria Sharma’s book Make Love Not Scars, discussed the horrific phenomenon of acid attacks, and was titled Make Love Not Scars after her book. Ria is founder of an NGO for acid attack survivors that also goes by the same name, and she was joined at the session by her partner and CEO of her charity, Tania Singh, and acid attack survivor-turned-model Reshma Qureshi.

The final day of the Jaipur Music Stage kicked off with a discussion entitled ‘Breaking Down The Walls: Music As An Instrument of Change’ as part of the JMS Conversations. Donisha Prendergast, Delhi Sultanate, Begum X, and Tritha Sinha were in conversation with Sunita Toor discussing the power of music to be a vehicle for social and cultural movements.