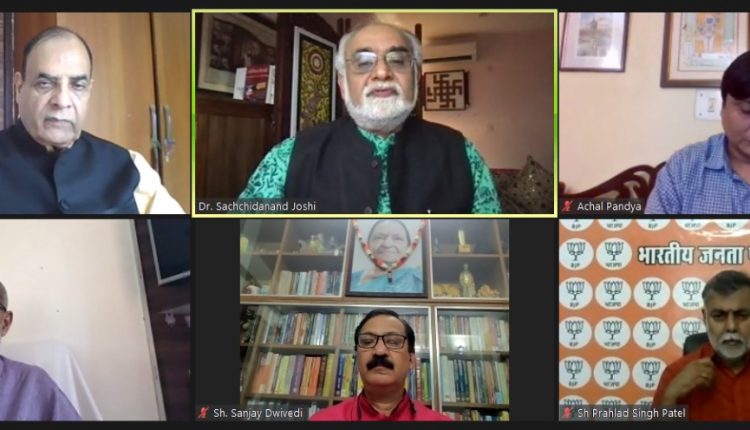 New Delhi: ‘Pt. Madhavrao Sapre ji’s values are a guide for the present generation. We all should learn from the life of Pt. Madhavrao Sapre that there is no value of freedom without self-reliance.’ These views were expressed by the Union Minister of State for Culture and Tourism, Shri Prahlad Singh Patel in a webinar organized on the occasion of 150th birth anniversary of Pt. Madhavrao Sapre. This program was organized by Indira Gandhi National Center for the Arts in collaboration with Indian Institute of Mass Communication. On this occasion an ideological journal ‘Media Vimarsh’ was released dedicated on MadhavRao Sapre.

While speaking on the topic ‘Ideological Reawakening of India and Madhavrao Sapre’, the Union Minister Shri Patel said that a statue of Pt. Madhavrao Sapre will be placed in the birthplace of Patharia. He said that at present the challenge of language is in front of us and it is increasing. So today we should take inspiration from the writings of Sapre ji. His contribution to Hindi journalism and development of Hindi language can never be forgotten.

Presiding over the webinar, senior journalist and Chairperson of Indira Gandhi National Center for the Arts, Shri Ram Bahadur Rai said that national reawakening is also a process of emergence of new knowledge. Sapre ji did this work through translation and translated the famous book ‘Dasbodh’ of Samarth Guru Ramdas. He said that Sapre ji’s entire life is an example of struggle and sadhana. On reading his essays, his vast knowledge can be easily recognized.

Dr. Ashok Sapre, grandson of Madhavrao Sapre said that my grandfather worked for the development of Hindi language even though he was a Marathi speaker. He believed that when the country becomes independent, then Hindi can be the national language of India. This shows how far-sighted he was.

Senior journalist Shri Alok Mehta said that Sapre ji has an important contribution as a social reformer. He started a social revolution with his writings. He wrote stories and published newspapers for public awareness. His work done for Dalit society and women is unforgettable.

Shri Vishwanath Sachdev said that it is surprising to read Sapre ji how he had tried to create a new system through journalism. He has tried to create a society where his future generations could live in happiness and peace. This is the specialty of great men that they walk two steps ahead of their time. Shri Jagdish Upasane said that Madhavrao Sapre was the pioneer of Hindi Reawakening. The overall assessment of the work done by him in the field of journalism, literature and language has not yet been done.

Conducting the program, Dr. Sachchidanand Joshi, Member Secretary, Indira Gandhi National Centre for the Arts said that Madhavrao Sapre was the first journalist in the country who was imprisoned in the year 1908 for sedition. He wrote in every stream of literature. His articles continue to inspire the youth even today. Welcoming the guests, Director General, Indian Institute of Mass Communication, Prof. Sanjay Dwivedi said that with the inspiration and Bharatbodh of Sapre ji, our country will emerge as a strong nation and will again make its mark as Jagat Guru. Vote of Thanks was given by Dr. Achal Pandya.