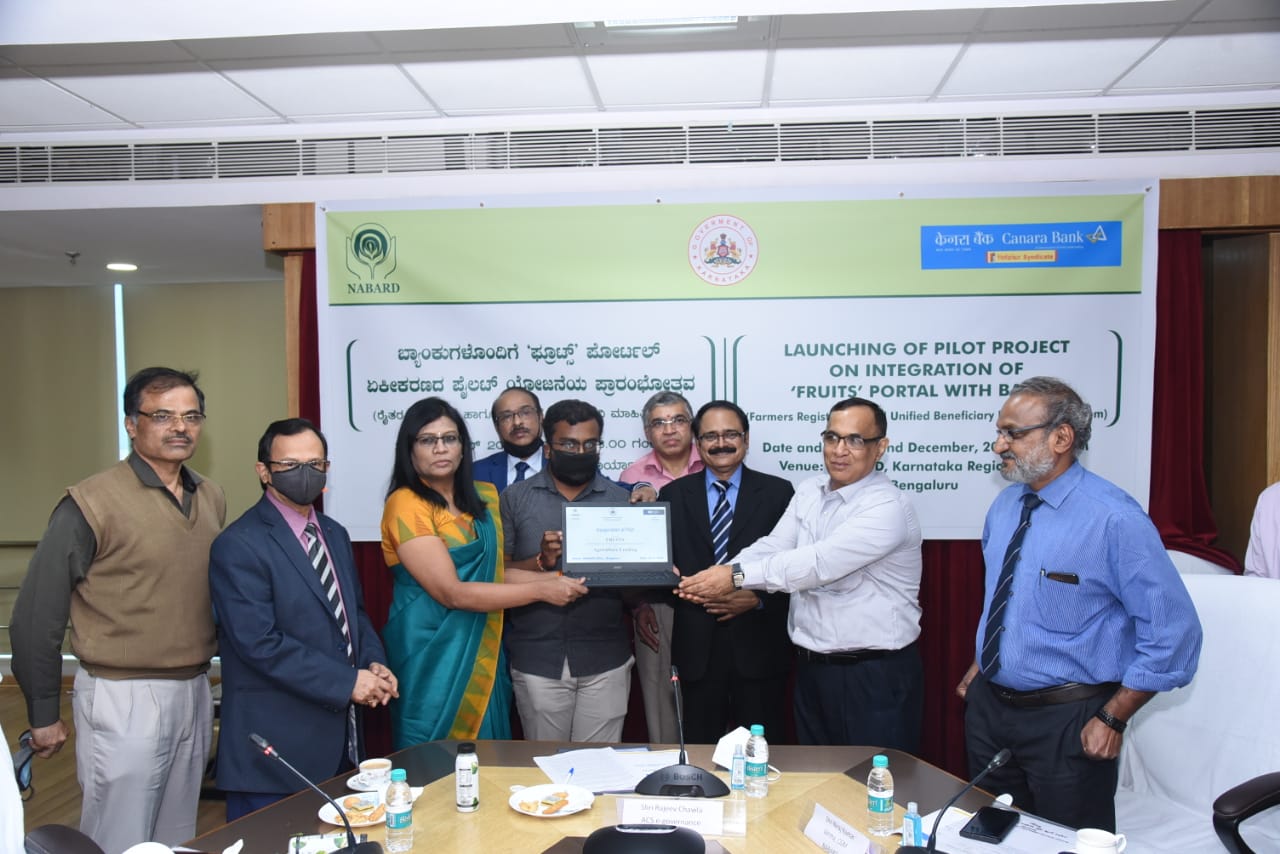 “FRUITS” portal, a project of e-Governance, Government of Karnataka was inaugurated

Chennai: A function was organized on 22 December 202 , wherein the “FRUITS”(Farmer Registration and Unified Beneficiary Information System) Portal, a project of e-Governance, Government of Karnataka was inaugurated.

Delivering the key note address, Ms. A. Manimekhalai, Executive Director, Canara Bank, observed that Karnataka State Government has always been in the forefront of technical initiatives to improve the ease of Banking as can be seen from the various initiatives like BHOOMI Package, Debt Waiver Portal and currently, the FRUITS Portal. The FRUITS Portal is integrated to the BHOOMI Package of the Karnataka State for fetching and validating the land details. One other important facility of this Portal is online creation of charge by which visit of farmers to Sub-Registrar Office is avoided. She thanked the Karnataka State Government and NABARD for identifying our Bank for launching the pilot project and assured that they will take all necessary steps to make the Project, a success.

Speaking on the occasion, Sri Rajeev Chawla, Additional Chief Secretary,e-Governance, Government of Karnataka informed that this is the latest initiative from the Government of Karnataka to bring all the farmers in the State with land and other details to a single Portal. In this Portal, all the farmers will be registered and given a FID Number. Using this number, the Financial Institutions and Lending Institutions can access the land details of the farmers as well as their borrowings and take a quick decision on lending to the farmers depending on their requirements. It is hoped that Bankers will find this initiative, a very useful one. He also lauded Canara Bank for agreeing to take up the Project on a pilot basis. Once the same is found successful, all other Financial Institutions will be brought on to the Portal so that at one place, all the data pertaining to the loans of the farmers will be available.

Sri NirajVerma, Chief General Manager & Head of Karnataka Regional Office, NABARD informed that NABARD is always in the forefront to enable improvements in the living standards of farmers by taking initiatives in various fronts such as providing refinance at cheaper rates to Societies and RRBs etc. He also informed that FRUITS Portal is the first of its kind in the country wherein the land and other details of all the farmers in the State are being captured and he hoped that this Project should serve as a role model to other States in the country. Karnataka, being the IT Hub of the country, always had tech-enabled initiatives and this FRUITS Portal is one such proposal from the Government. He also appreciated Canara Bank for accepting the pilot Project and hoped that soon all financial institutions will be onboarded to the Portal so as to have a single data source of the farmers. He thanked Department of e-Governance, Government of Karnataka for spearheading this initiative.