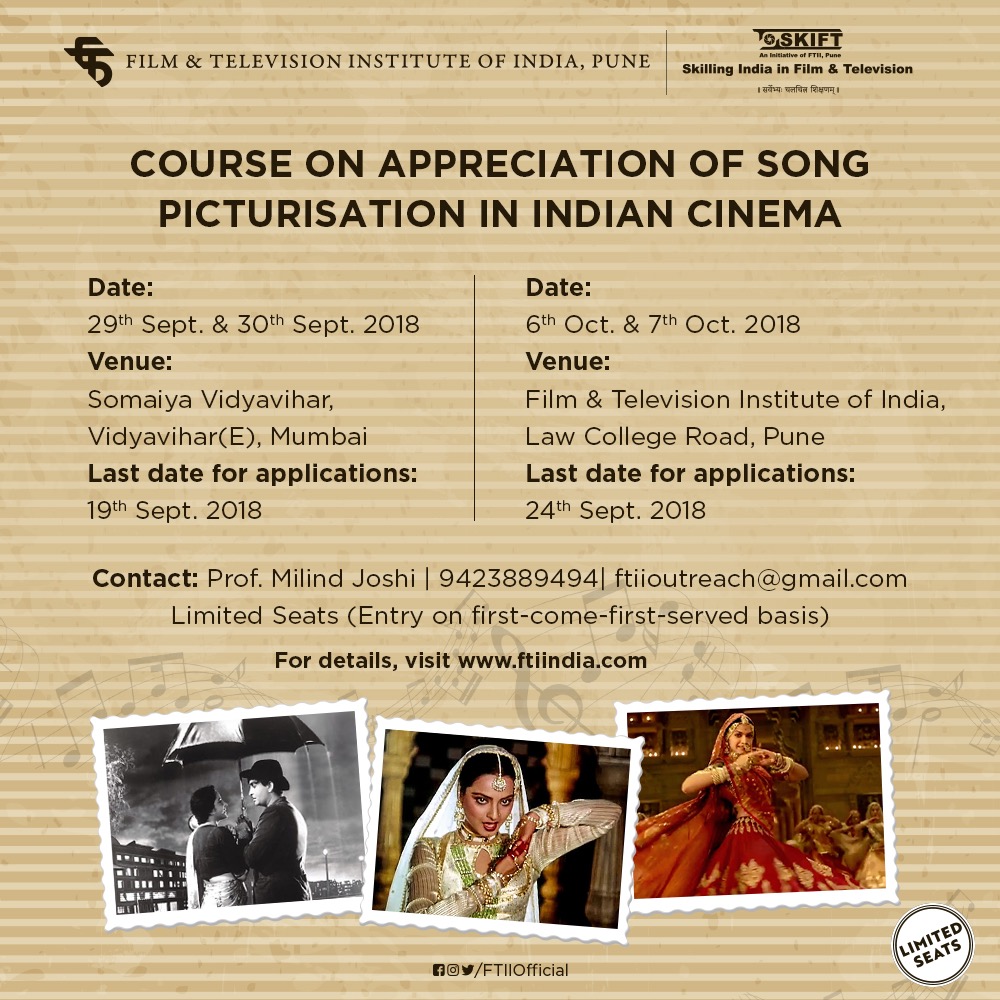 Mumbai: A unique course on ‘Appreciation of Song Picturisation in Indian Cinema’ by Film and Television Institute of India (FTII) will be held in Mumbai during September 29-30, 2018.

The course will be conducted in Somaiya College, Vidyavihar.

“Songs have been an integral part of our films right from our first talkie, ALAM ARA (1931). We have music in our blood and we see this in our lives too where we have a song for every situation from when we are born to when we die. It is widely believed that film song evolved to a highly sophisticated art form by the 1950s and ’60s, becoming perhaps the most important part of our storytelling on film. The best of songs combined the best of writing, music and dance with a strong sense of storytelling through filmic techniques. What’s more, they gave mainstream Indian cinema a unique identity of its own.Till recent times it was unthinkable for an Indian film to not have songs. Little wonder then they are are such an important part of Indian cinema.” said , Director, FTII, Shri Bhupendra Kainthola while announcing the Course.

Setting the tone for this one-of-a-kind programme, Karan Bali, Course Director, says, “The Course will cover film song and its use as a critical element of storytelling. It will touch the evolution of song picturisation techniques down the years, both technically and aesthetically, besides the golden age of film music, the 1950s, through some of our eminent composers, lyricists and choreographers. Works of filmmakers who have elevated song picturisation into an art form of its own—- Guru Dutt, Vijay Anand and Mani Ratnam— will be discussed as will be film songs and their picturisation in contemporary times.”

Karan Bali (FTII,Film Direction,1993) is a leading exponent of film music history. As a filmmaker, Bali has made several documentaries and also teaches filmmaking all over India.He has contributed considerably by writing on Indian cinema history in both, print and on-line media.

The Course is open to all, with no age bar. Admission is on first-come-first-served basis. Last date for applying is 19th September 2018. Course details are available on the FTII website, here.

A similar Course is also being conducted in Pune during October 6-7, 2018.