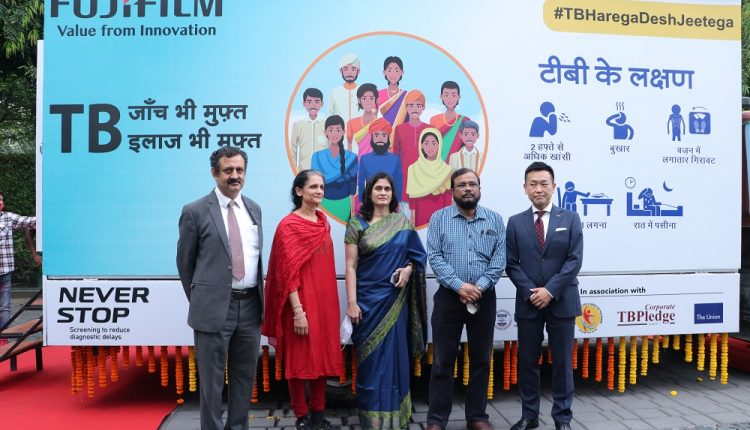 New Delhi: Fujifilm India Pvt Ltd, a pioneer in diagnostic imaging and information systems for healthcare facilities announced the launch of a National Campaign Drive to increase awareness and eliminate the spread of Tuberculosis in India. As part of the campaign titled “Never Stop: Screening to Reduce Diagnostic Delays”, Fujifilm India aims at increasing awareness on TB and identify individuals having TB symptoms among vulnerable and marginalized sections of the society by introducing a mobile van with an X-ray facility along with a field team and community volunteers.

In line with the government’s mission to make India TB free by 2025, Fujifilm India has launched this campaign in association with National TB Elimination Programme (NTEP). Through its existing network of labs, the NTEP will help in TB testing and provide TB medicines as per the program guidelines. The International Union Against TB and Lung Disease (The Union), a global leader in lung health, will provide technical support through the United States Agency for International Development’s (USAID iDEFEAT TB Project. The campaign is also a part of the ‘Corporate TB Pledge (CTP)’, a USAID supported initiative launched with the Government of India in 2019 to galvanize India’s corporate sector to combat TB, raise awareness of TB as a curable disease, and, ultimately, improve TB health outcomes. The CTP provides corporations with the flexibility to contribute to TB elimination efforts at different levels depending on their resources. As a CTP ‘Diamond’ level member, the highest level of CTP participation, Fujifilm has developed a plan to increase TB awareness, screening, and treatment within the company setting; and serves as a CTP “champion,’ mobilizing other companies to join TB elimination efforts.

Speaking on the launch of the campaign, Mr. Koji Wada, Managing Director, Fujifilm India Pvt Ltd said, “Tuberculosis is a major and growing health concern in India with many people losing their lives every year. We at Fujifilm have always been committed to providing the best healthcare technologies and innovations to make this world a better and healthier place. With our mission of ‘Never Stop’, NTEP and we together are making sure that facilities reach the last corner of the country and we win this tuberculosis epidemic. I thank all our partners for their immense contribution to this initiative and making this basic facility accessible to difficult to reach population.”

Dr. Sudarsan Mandal, DDG TB Central TB Division, also added, “India accounts for a quarter of the global TB burden and continues to top the list of patients with tuberculosis, according to a report released by the Global Tuberculosis Report 2020. To control the growing spread of Tuberculosis, we have aligned our efforts by driving conversations leading to an unprecedented increase in TB notifications and improvements in quality diagnostic and treatment. Our association with Fujifilm India is a step ahead in both public and private sectors to strengthen tuberculosis (TB) diagnostic capacity with Fujifilm’s innovative equipment that will ultimately result in an increase in TB cases identification and hence contribute to eliminate TB in the country by 2025.”