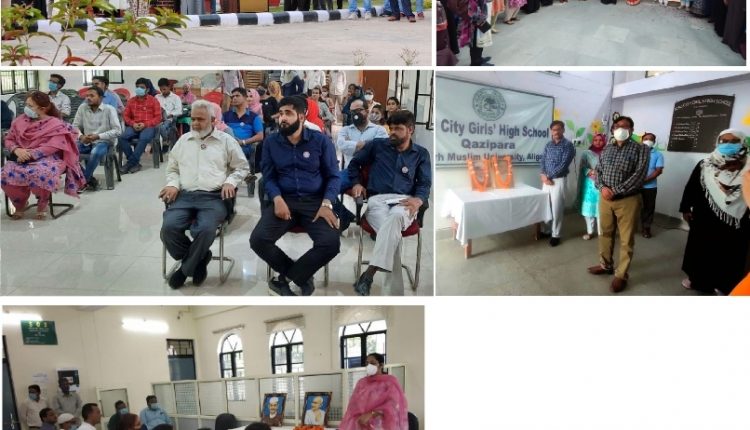 At the girls residential hostel, Begum Azeezun Nisa Hall: Prof Subuhi Khan (Provost) administered a ‘Clean India’ pledge to wardens and students to keep the country neat and clean, remain committed towards cleanliness and to devote time for cleaning activities.

“Cleanliness is a befitting homage to Gandhi Ji on his birth anniversary who dreamt of a clean India”, she said.

Prof Subuhi added: “A host of activities were held to mark the occasion such as a mass sanitation drive in line with the Swachh Bharat Mission, an awareness programme on cleanliness and Azadi Ka Amrit Mahotsav lecture on ‘Khadi: Revolution to Fashion’ by Nazia Begum”.

She added that the school choir sang the National Anthem and other awareness programmes were also held.

In her speech, Amna Malik said: “Mahatma Gandhi taught us the values of truth and non-violence. His ideals also made it possible for other countries to free themselves from colonial rule without bloodshed. He inspired generations to think of ‘Swaraj’ and struggle for it peacefully”.

“The National Flag was hoisted and a cleanliness drive was conducted in the school premises to celebrate the day”, said Naghma Irfan.

In his Gandhi Jayanti speech at the AMU City Girls High School, Dr Md Alamgir (School Principal) pointed out that Mahatma Gandhi’s notion of non-violence has attained a special status across the globe.

“Gandhi Ji not only theorised non-violence, he adopted it as a philosophy and an ideal way of life. He made us understand that nonviolence is not a weapon of the weak; it is a weapon, which can be tried by all”, said Dr Md Alamgir.

During the celebrations at the AMU City Girls High School, portraits of Mahatma Gandhi and Lal Bahadur Shastri were garlanded and a speech on ‘History of Mahatma Gandhi and his role in Freedom Struggle’ was delivered by Zia ul Haque. School students also presented a rendition of the song ‘Sabarmati Kesant’.

The Chief Guest of the Gandhi Jayanti celebrations at the National Service Scheme (NSS); Prof Arshad Umar, Principal, University Polytechnic said: “Gandhi Ji was a forerunner of non-violence and truth. For the Indian liberation struggle, he founded the Satyagraha and Ahimsa movement. As the Father of the Nation, he spearheaded India’s independence struggle alongside many other national leaders in opposition to British rule”.

He also distributed prizes to the winners of patriotic song and essay writing competitions held to mark the Gandhi Jayanti and Azadi Ka Amrit Mahotsav celebrations.