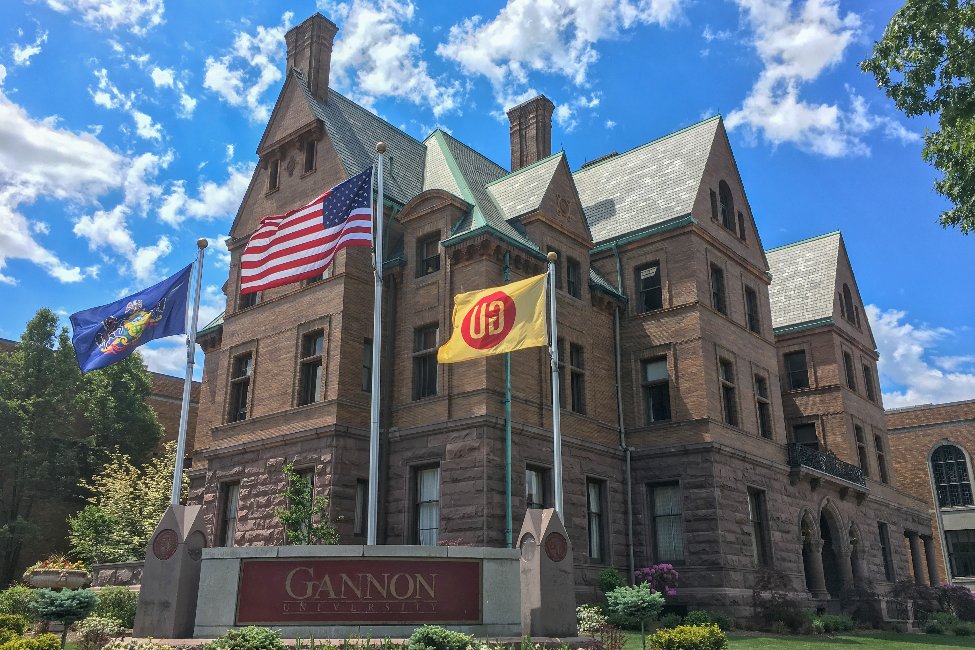 Gannon University will join in celebrating women’s suffrage with the unveiling of a historic marker on the National Votes for Women Trail at 2 p.m. on Friday, June 24 at 202 W. Eighth St.
The National Collaborative for Women’s History (NCWHS) and the William G. Pomeroy Foundation partnered to launch a historic marker program commemorating the history of women’s suffrage in the United States, the National Votes for Women Trail.

The National Votes for Women Trail promotes a program of historical markers to commemorate the people, places, and events important to passage of the Nineteenth amendment in 1920. These markers are based on extensive research in primary sources and represent the diversity of places, events, and people of the suffrage struggle. The Pomeroy Foundation funded five markers for each state.

Erie County was fortunate to receive the opportunity to apply for a marker to honor Augusta Fleming, a local active proponent for the women’s suffrage movement.

Augusta Brown Fleming exemplified the ideals of the organization she led for over a decade, first as president of the Northwestern Pennsylvania Equal Franchise Association (also known as the Equal Suffrage Association), then as founding president of the League of Women Voters in 1920. She opened her own home as the headquarters for suffrage meetings and activities, and when Erie women marched on July 8, 1913 — one of Pennsylvania’s first marches for women’s suffrage — the march stepped off from her address at 202 W. Eighth St.
Lorraine Dolan, immediate past president of the League of Women Voters of Erie County, was tasked with the effort of making and submitting the application. Joining forces with Linda Bolla, independent historian, the two successfully attained approval from the Pomeroy Foundation and were granted a spot for Erie suffragist Augusta Fleming on the national trail.

Dolan and Bolla, who were active during the 2020 Erie County Suffragist Centennial year, sought support from Doug Oathout, Gannon University’s chief of staff and director of Marketing and Communications, to attain permission to place the marker at the home of Augusta Fleming. Today, Augusta Fleming’s home is an apartment building and is home to Gannon University students. Erie City Council was also involved, issuing a land variance as the space between the building and street is actually owned by the city.

Historic markers awarded through the Pomeroy grant program highlight sites on the National Votes for Women Trail (NVWT). The NVWT, a project of the NCWHS, identifies the many sites that were integral to the suffrage movement, and makes them accessible on a mobile friendly website to be easily searched by location, suffragist, ethnicity and a variety of other useful criteria.

The Pomeroy Foundation, which is a private, grant-making foundation based in Syracuse, N.Y., provided grants through its National Women’s Suffrage Marker Grant Program to recognize historically significant people, places or things across the United States instrumental to women’s suffrage.