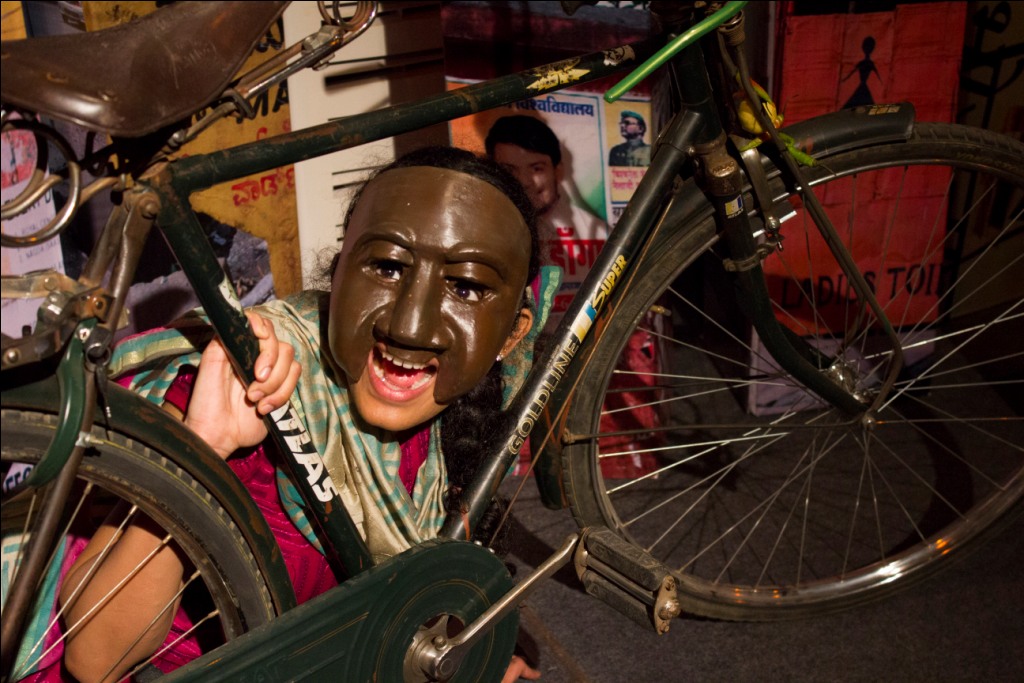 New Delhi, 20 October: One of the most prestigious theatre festivals of Delhi, Old World Theatre Festival kickstarted with a difference yesterday. The 9 day long festival which spreads out to 3 stages at India Habitat Centre, opened with a Kutiyattam performace by Natyakairali from Kerala. Kutiyattam is the sole existing form of Sanskrit Theatre and has been recognized by UNESCO as a “Masterpiece of the Oral and Intangible Heritage of Humanity”. It is one of the most stylized forms of theatre.

The other performance during the day was again from the south of India. “Stand on the Street” performed by the Chennai-based Visual Respiration proved to be a one of a kind experience inviting audiences to get lost in the culinary stories of our streets. It brings an unusual experience unearthing for us the labour and love behind street food. The performance was restricted to an audience of 30.

The coming days at the Old World Theatre Festival brings for theatre goers a Pan-Indian selection of riveting original scripts. Actor-director Anahita Uberoi’s musical comedy Gaa Re Maa on Sunday 21st Oct tells the story of two mothers and their sons with differing musical tastes striving to lead a harmonious life. Popular theatre and television actress Bharti Achreka plays a Hindustani Classical Musician and pop singer Suneeta Rao plays a former chorister. This will be followed on Monday 22nd Oct by Qadir Ali Baig Foundation’s critically acclaimed Under an Oak Tree about an advertiser who yearns to reclaim his roots.

Ministry of Ports, Shipping and Waterways and Ministry of…

Cold desert Ladakh was actively flooding during the…

One Night Only, a widely anticipated production in the line-up recreates the lesser known yet fascinating tale of Aaravan from the Mahabharath in whose memory the transgender community makes the yearly pilgrimage to Koovagam in Tamil Nadu.

There will be two scintillating all-women productions in the line-up. Dekh Behen, a bittersweet comedy about daughters, girlfriends, mothers, sisters, and wives getting through one big fat Indian wedding featuring the likes of Shikha Talsania and Mithila Palkar and Ramanjit Kaur’s Beyond Borders exploring boundaries of nationality, caste, colour, ethnicity, gender, body and mind.

Barefoot Theatre’s The Legend of Ila, an exciting musical exploration of gender fluidity and queerness, and Sandbox Collective’s art-rock music show Dastaan Live, which recreates the History of Delhi, are must attends for music lovers.

How political power transforms to tyranny quelling all kinds of dissent and how human beings get entrapped in the grand scheme of power play are explored in Pascualnama based on the Spanish Classic going by the same name.

Tickets are available at Bookmyshow.com and at the venue.

Ministry of Ports, Shipping and Waterways and Ministry of Culture sign an MoU for…

India is home to one of the world’s largest start-up eco systems, India offers…