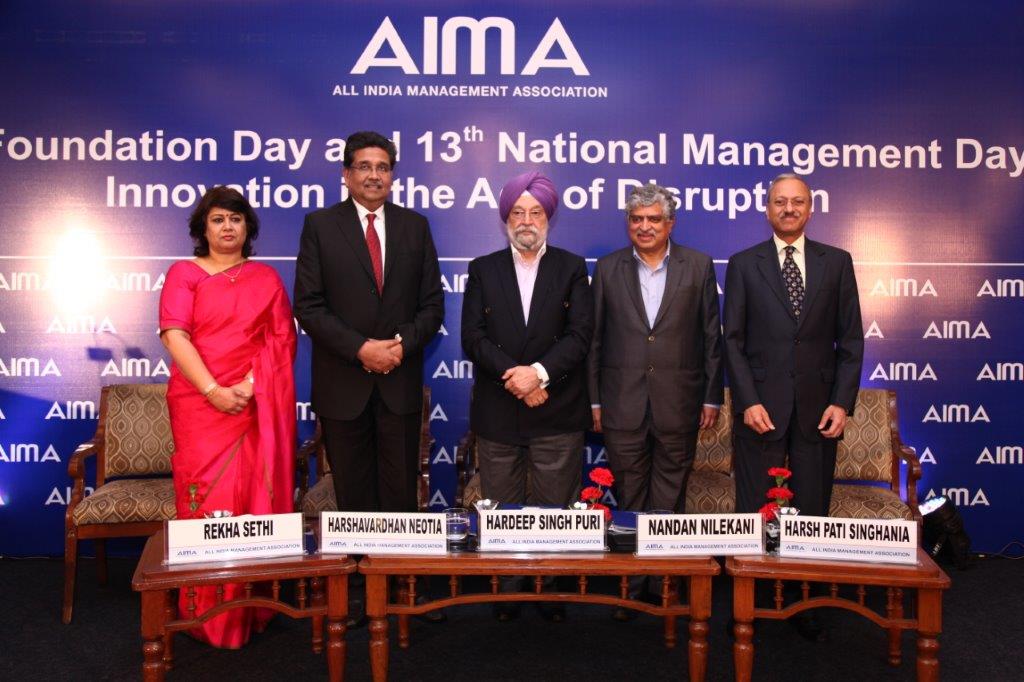 Give a large part of GST to municipal corporations: Kelkar

New Delhi: Dr Vijay Kelkar, the architect of many recent economic reforms, says that the Government of India needs to share a large part of the GST revenues with the municipal corporations to enable the city economies to become more productive and efficient. Kelkar was speaking at a ceremony to celebrate the 63rd Foundation Day of All India Management Association (AIMA), the apex body of India’s management fraternity.

Kelkar received the AIMA Public Service Excellence on the occasion from Hardeep Singh Puri, Minister of State (Independent Charge) for Housing and Urban Affairs. Kelkar requested the minister to persuade his party to make the necessary changes in the constitutions to allow devolution of taxes to the third level. The Minister agreed with Kelkar and said that the future of urbanization was in the empowerment of the urban bodies. “We need to provide the ease of living in our cities,” he said.

The Minister also presented the AIMA-JRD Tata Corporate Leadership award to Aditya Puri, Managing Director, HDFC Bank. Receiving his award, Puri said that HDFC Bank had treated technological disruption as an opportunity and it had become the only bank in the world to give a loan online in mere 10 seconds. He said that it had become possible to offer modern banking even in the rural areas because of the mobile phones. He said that HDFC Bank was ready to compete in the digital retail too. “We want to own the payment space with an online-offline model,” he declared.

Hardeep Singh Puri congratulated AIMA for creating awareness about disruption and mobilizing Indian business leaders to focus on innovation. He said that India needed to embrace disruption and it needed to have political resilience for that. He talked about Swachch Bharat and Pradhan Mantri Awas Yojana as major disruptive innovations by the government. He said that 95% of the target of building household toilets had been achieved. Under the PMAY scheme, the government had sanctioned 7.3 million houses out of the targeted 10 million; and 4 million of those had already been grounded, he said. The Minister promised that by 2021 all the 10 million houses will be handed over.

Nandan Nilekani, Chairman, Infosys, who chaired the award jury, said that disruptive innovation was not something only for the 20-somethings in hoodies but for everyone. He pointed out that the velocity of change had accelerated and more new knowledge had been created in the past six months than in the previous thousand years. He said that the sensorization of the world was yielding more data and the data was leading to softwarization of the industry. “Algorithms are open source and technology is not a barrier anymore. It is all about the talent to apply the available technologies in innovative ways,” he said. He emphasized that one had to be willing to cannibalize own business and go from low volume-high-price model to a high-volume-low-price model.

AIMA President, Harshavardhan Neotia drew attention to AIMA’s efforts to help Indian companies adapt to the change and he said that the AIMA awards celebrated the change leaders. Talking about disruption, Neotia said that it was no longer enough for companies to upgrade their products and processes and now they needed to target those who were not consuming their products for reasons of accessibility or affordability.

Harsh Pati Singhania, Vice President, AIMA appreciated the government’s efforts to use technology and innovations to transform the economy. He said that housing could be the engine of economic growth in India, as it involved a large number of industries and created jobs at a large scale.

AIMA’s Foundation Day was celebrated as the National Management Day across the country and a large number of city and state based local management associations commemorated the occasion.