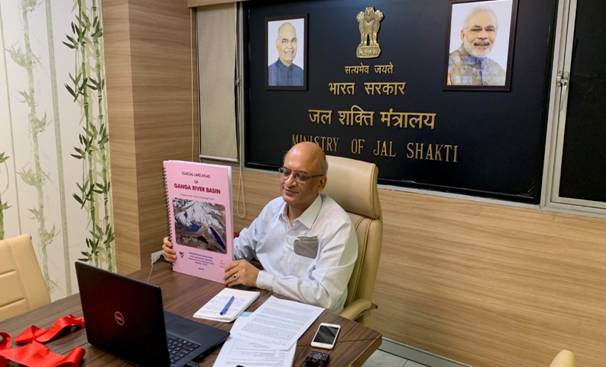 The present glacial lake atlas is based on the inventoried glacial lakes in part of Ganga River basin from its origin to foothills of Himalayas covering a catchment area of 2,47,109 sq. km. The study portion of Ganga River basin covers part of India and transboundary region. The Atlas is available on Bhuvan portal of NRSC, ISRO (https://bhuvan.nrsc.gov.in/nhp/), India WRIS Portal (www.indiawris.gov.in) and NHP web site of DoWR, RD & GR (www.nhp.mowr.gov.in).

The Secretary, Department of Space & Chairman, ISRO, Dr. K. Sivan also launchedthe NHP –Bhuvan portal of NRSC.The National Hydrology Project or NHP-BhuvanPortal is a repository of information on the initiatives undertaken by NRSC under NHP with a facility to download the reports and knowledge products being developed by NRSC. Link for the portal: https://bhuvan.nrsc.gov.in/nhp/

Secretary, DOWR, RD & GR,Shri Pankaj Kumar congratulated ISRO, NRSC and NHP team for making painstaking efforts in development of knowledge products for the benefit of people at large. He highlighted the possible uses of the Glacial Lake Atlas for the water resources professionals, researchers, disaster management authorities and other stakeholders for managing the glacial lakes as well as to mitigate the possible adverse impacts of Glacial Lake Outburst Floods (GLOF) and climate change. He opined that this initiative under NHP, a Central Sector Scheme implemented by Department of Water Resources, River Development & Ganga Rejuvenation (DOWR, RD & GR) is a step forward for facilitating acquisition of reliable information and putting the same in public domain which would pave the way for an effective water resource development and management.

National Remote Sensing Centre (NRSC), Indian Space Research Organization (ISRO), Hyderabad as one of the Implementing Agency under the National Hydrology Project (NHP), is carrying out hydrological studies using satellite data and geospatial techniques. As a part of the responsibilities entrusted to NRSC under NHP, detailed glacial lake inventory, prioritization for Glacial Lake Outburst Flood (GLOF) risk, and simulation of GLOF for selected lakes have been taken up for all the catchments of Indian Himalayan Rivers. Under this activity, an updated inventory of glacial lakes using high resolution satellite data was prepared for the Indus River basin and published in December 2020, and currently an updated inventory of glacial lakes has been prepared for the Ganga River basin.

In the present study, glacial lakes with water spread area greater than 0.25 ha have been mapped using Resourcesat-2 (RS-2) Linear Imaging Self Scanning Sensor-IV (LISS-IV) satellite data using visual interpretation techniques. Based on its process of lake formation, location, and type of damming material, glacial lakes are identified in nine different types, majorly grouped into four categories. A total of 4,707 glacial lakes have been mapped in the Ganga River basin with a total lake water spread area of 20,685 ha.

The expected utility of the atlas is:

The atlas provides a comprehensive and systematic glacial lake database for Ganga River basin with size > 0.25 ha
In the context of climate change impact analysis, the atlas can be used as reference data for carrying out change analysis, both with respect to historical and future time periods
The atlas also provides authentic database for regular or periodic monitoring changes in spatial extent (expansion/shrinkage), and formation of new lakes
The atlas can also be used in conjunction with glacier information for their retreat and climate impact studies.
The information on glacial lakes like their type, hydrological, topographical, and associated glaciers are useful in identifying the potential critical glacial lakes and consequent GLOF risk.
Central and State Disaster Management Authorities can make use of the atlas for disaster mitigation planning and related program.