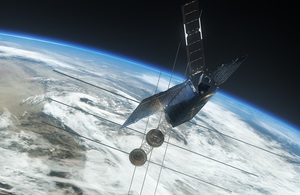 His tour of facilities at AAC Clyde Space in Glasgow comes after Tuesday’s publication of the Integrated Review of Defence, Security and Foreign Policy (the IR), which defines the UK Government’s ambition for national security and foreign policy over the next decade.

Investment in space forms an integral part of the plan as the sector in Scotland aims to grow in value to £4billion by 2030.

Technologies produced in Scotland are at the cutting edge of science in the space sector. Space firms headquartered in Scotland bring in £254m and about 20 per cent of those working on British space projects do so in Scotland, employed by 133 organisations.

The UK Government is committed to increasing spending on defence, which will lead to investment and creation of jobs in the Scottish hi-tech industries for years to come.

University of Tübingen: Defects in quartz crystal structure reveal the origin of dust

Siberian Federal University: Scientists about the Negative Thermal Expansion in…

RUDN: RUDN Mathematicians say that 5G will cope with traffic when using WiGig

University of Tübingen: Defects in quartz crystal structure reveal the origin of…

iednewsdesk Jun 27, 2022
Global warming and a progressively drier climate in many parts of the world are causing more dust storms. To…

RMIT: RMIT builds on its future as host of the 2022 World Building…