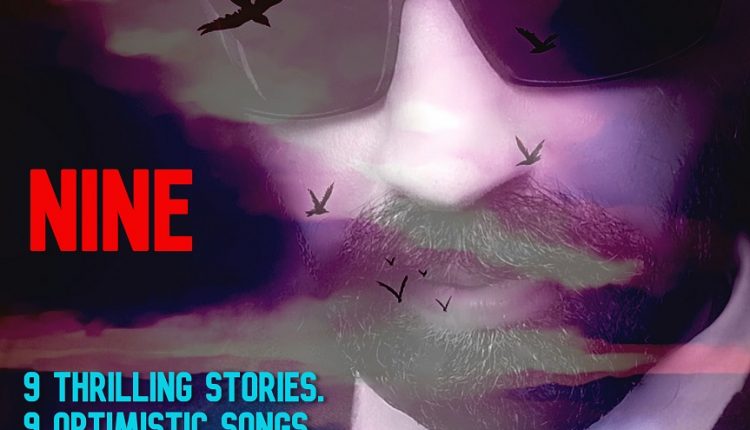 Vineet Singh Hukmani is the first Asian/Indian to achieve a series of  accomplishments on global radio charts in 2021, multiple Grammy submissions among the other achievements that his releases have brought him recently. The genre-agnostic artist has not only been receiving decent airplay on global radio platforms but has also proven his mettle by securing top slots across different regions and genre charts — from pop and indie, to rock, funk & hip-hop. An electronics engineer by education, Vineet is also the former MD and founder of India’s only International format radio station – Radio One.

Looks like a couple of record hitters in the last year weren’t enough for the Harvard Business School alumnus who decided to pivot to an even richer experiential concept with his latest offering titled ‘Nine’. Call it a thrilling book with a soundtrack or a multimedia book that showcases 9 stories combined with 9 tracks, ‘Nine’ is a one-of-a-kind that features a buoyant new self-titled single along with 8 of the artist’s chart-topping number 1 tracks.  The QR codes are embedded with each of the stories which have titles inspired by the track names, namely: Nine, Dreaming Out Loud, Turning Back Time, Hurry, So New, I Pray, Where’s The Fun and Jab The World.

Nine, the lead single of the album is an upbeat song about being there for someone, when they need you. “I was conditioned since childhood to be a ‘provider’ for my family and for me that is my purpose. As the lyrics in the song express ‘Nine times out of then, I’ll be there for you, the only other time I’ll be thinking of you’… is the core of my life’s purpose,” says Vineet.

Talking about the concept, Vineet says, “Nine: 9 thrilling stories. 9 Optimistic songs is my attempt to make my music more immersive for my audience. While I tasted success with a world record for my 9 singles, reaching the number 1 position in the European charts I felt the music had untapped potential in the immersive space. It is an artist’s endeavour to make their art more memorable to their audience. I am a musician at heart but I discovered that there are stories embedded in my music that need to be told. I combined 2 of my passions, music and movies and have merged them into a book that also plays the songs; it’s a culmination of what I feel for my music and how I have craved to tell the hidden stories within them. And what is now remaining, is a prayer, that the concept is appreciated by readers and music lovers.”

While Vineet enjoys a good action thriller with a twist he also enjoys the concept of mythical entities in cinema making appearances in the lives of normal everyday folks.  Many people enjoy this genre of cinematic storytelling and that is the tone of each of the Nine Stories. The essence or core of each story is borrowed from the genre-agnostic artist’s songs. For example the song ‘Dreamin Out Loud‘ is about dreaming of winning, that is also the essence of the story, however the characters, the backdrop, the twists and ending have been crafted to entertain the reader. “Once a reader reads the story and listens to a song, the immersive experience is complete,” Vineet explains.

More about the artist |

Vineet Singh Hukmani aka ‘Vineet’ is a global radio chart-topping artist, whose nascent but impactful tryst with music extends from composing radio-friendly pop earworms to creating a cohesive ecosystem for Indian artists to achieve radio playouts internationally. The latter is a subject which Vineet seems to have understood rather well, given the success of his recent singles which have secured a number of coveted spots in the global radio charts.

Vineet began this stellar journey of achievements in 2021 and by late December 2021/Early this year, Vineet has secured a big win for himself and Independent Indian artists by becoming the first ever artist in the world to have 9 of his singles reach the number 1 positions in 2021 on the coveted European Independent Top 100 music charts this month.He has received the certificate & plaque from MEI Indipendenti, headquartered in Italy and EIMC – The European Independent Music Commission, the official bodies that represent the 26-year-old top 100 chart.

His music has topped other prestigious world music charts like the DRT and Cash Box Magazine charts in the USA, The World Indie Music Charts, and the World Radio Charts. In 2021, 3 of his songs, were submitted in consideration for a Grammy, in 4 mainstream categories.

Vineet’s influences musically include the synth pop era of the 80s and his vocal idols are mostly the classic rock gods of the 70s & 80s. While most of Vineet’s music comfortably fits in under the category of pop, he is not limited by a genre and Vineet lets his love for the synth-pop era of the 80s and panache of classic rock come up in his music every now and then.

Vineet is also a part of his family band AVNI VIR VINEET with his 15-year-old twins who had 2 popular radio hits in 2020 – The peppy TWENTY-TWENTY (no. 1 both on the World and European top 100 charts) and the melodious CAN’T WAIT. The band is Vineet’s way of educating Avni and Vir on the nuances of what global sound and career in music demand. Both Avni and Vir sing and play guitar and enjoy composing new originals.

Vineet is also founder of greatsong.world, a foundation that trains artists from Asia on how to produce & place great quality music on radio in the US and Europe and also helps artists discover e-music earning strategies and on how to compete for top level world awards like the Grammys & Eurovision.