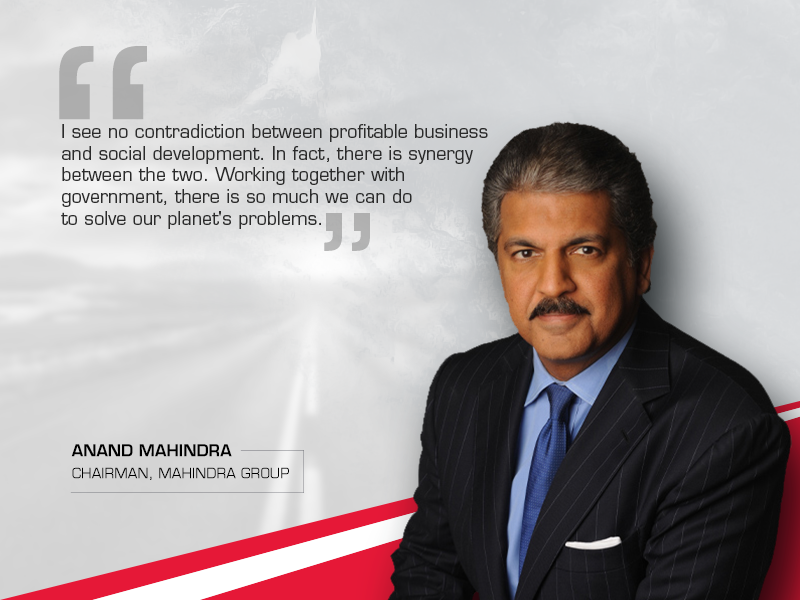 DAVOS: In an effort to spur further climate action at this year’s Global Climate Action Summit (Summit) in September and at the United Nations Climate Change Conference (COP24) in December, Summit co-chair and Mahindra Group Chairman, Anand Mahindra today challenged businesses around the world to join the growing number of companies committed to setting greenhouse gas reduction targets in line with climate science.

I applaud all 330+ companies that have already committed to set science-based targets through the Science Based Targets initiative. Two of the three Mahindra companies with the highest emissions in the Group, Tech Mahindra and Mahindra Sanyo Special Steel, have already done so.

More than 330 of the world’s biggest companies have already committed to align their strategies with the ambition of the Paris Agreement through the Science Based Targets initiative. Almost 900 more companies have declared their ambition to set science-based targets within the next two years in their disclosures to the CDP, signaling the emergence of a ‘new normal’ in the way businesses are developing their strategies for the future. Mahindra Sanyo Special Steel Pvt. Ltd. set a science-based Greenhouse Gas emission reduction target of 35% under SCOPE 1, 2 and 3 per ton of steel produced by the year 2030, against 2016 baseline year.

A key purpose of the 2018 Global Climate Action Summit which will be held from September 12-14 in San Francisco, is to showcase climate action around the world, along with bold new commitments, to give worldwide leaders the confidence they need to go even further when they meet at the United Nations COP24 in November.

Summit participants, including sub national governments, investors, businesses and others from around the world, will report on their climate action and commit to ambitious new actions that can help prevent the climate from warming more than 2 degrees Celsius—the point at which scientists warn of potentially catastrophic global consequences.

Setting science-based targets is a great way for businesses to future-proof growth and boost their competitive advantage in the transition to a low-carbon economy. It also sends a powerful signal to global governments that business is aligning strategy with the Paris Agreement, opening the way for us all to move further, faster on the ambition of the Agreement. We welcome the challenge to business to step up in advance of the Global Climate Action Summit by committing to the Science Based Targets initiative, and we hope that many businesses will quickly follow Mahindra’s lead,” said Paul Simpson, CEO of CDP, one of the partners of the Science Based Targets initiative.

Today’s announcement is the first of what will be multiple “Summit Challenges” that will concretely help deliver greenhouse gas reductions to help ensure worldwide emissions start trending downward no later than 2020—a goal that must be met to prevent dangerous temperature rise. It will also help the Summit deliver on its goal to help continue a worldwide energy transition that generates quality employment and inclusive economic growth.