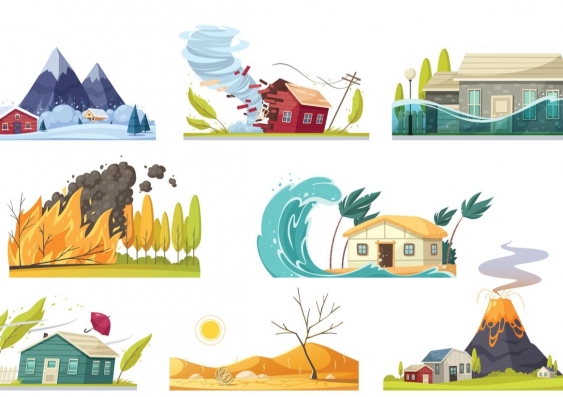 The movements of communities across the world due to disaster risks are mapped by new UNSW Sydney research.

Research that is intended to help inform how communities around the world can better relocate amid natural disasters and intensifying climate change has been launched by UNSW Sydney’s Kaldor Centre for International Refugee Law and the state-led Platform on Disaster Displacement.

Faced with increasing exposure to disasters and the effects of climate change, some communities opt to move permanently out of harm’s way. Some call this process ‘planned relocation’, and the new research maps hundreds of such community moves since 1970, in all parts of the world.

The phenomenon of planned relocation is global, and the study Leaving Place, Restoring Home, uncovers cases from 60 countries and territories. The study identifies the highest number of cases across the United States of America, the Philippines, India, Sri Lanka, China, Indonesia, Vietnam, Fiji, Japan and Colombia. About half of the cases are in Asia. All involve groups of people moving permanently from one area to another within the same country.

Planned relocations are initiated most often because of floods, but also because of tsunamis, storms, erosion, earthquakes and landslides, the study finds. Drought and sea-level rise are also factors in some cases. They can happen in reaction to or in anticipation of such hazards, or in some cases, both in anticipation and reaction. Often, though, it is the combination of multiple hazards, occurring alongside or after one another, that trigger relocation. In making decisions to relocate a group of people permanently, social, political, economic and demographic considerations also come into play.

“Disasters and climate change profoundly affect people’s lives and livelihoods, and the risks of displacement are only growing,” said the director of the Kaldor Centre, Professor Jane McAdam. “Planned relocation has always been a ‘last resort’ option, but as this report shows, hundreds have been initiated in the past 20 years. It’s vital that we build a strong evidence base that can help to identify the pitfalls and best practices of planned relocation as one possible response to the impacts of disasters and climate change and we hope this research can be a first step in this regard.”

The Kaldor Centre and the PDD report Leaving Place, Restoring Home includes a dataset of more than 300 cases, with a detailed analysis of 34 cases, including 10 located in the US (in the coastal states of Alaska, Washington and Louisiana and in mid-western flood-affected states of Illinois, Wisconsin and Missouri). The report helps to reveal what planned relocation looks like around the world. Here are some notable findings from the analysis of 34 cases:

How long did planned relocations take? Some communities relocated over a year or two (Denimanu, Fiji), while for others the move took up to eight years (Vunidogoloa, Fiji; Soldier’s Grove, US; and Letau, Vanuatu). In many ‘ongoing’ cases, the process has taken decades, as is the case in Shishmaref, Alaska, which initiated their relocation process in 1976.

How far did they go? Overall, moves in the study tend to be less than two kilometres from the site of origin to the site of destination. Sometimes the distance is as short as 200 meters (Grantham, Australia), sometimes as far as 64 kilometres (Isle de Jean Charles, US).

How many people are involved in planned relocations? The number of households ranges from four (Vunisavisavi Village, Fiji) to 1000 (Gramalote, Colombia). The majority of cases analysed involves fewer than 250 households, and many are in fact far smaller.

Who are they? About half the 34 cases in the detailed analysis involve communities that identify as indigenous and nearly all cases involved rural communities moving to another rural site.

Leaving Place, Restoring Home is the first of a suite of studies underway. The authors, Erica Bower and Sanjula Weerasinghe, both affiliates of the Kaldor Centre’s ‘Climate Change, Disasters and Displacement’ project, are also working on Asia and Pacific snapshots; a compilation of 10 case studies on unexplored spatial patterns; and a report on cases associated with sea-level rise. To overcome the English-language bias, a complementary study uses their methodology and examines French and Spanish literature to identify cases.

As some governments are developing policy and operational frameworks to undertake planned relocations in the near future, Ms Bower and Ms Weerasinghe see Leaving Place, Restoring Home as a vital, evidence-based contribution.

‘We need continuing efforts to monitor and research planned relocation, to guide policy and practice that minimises risks and harms, and protects the human rights, security and dignity of people,’ the authors write.