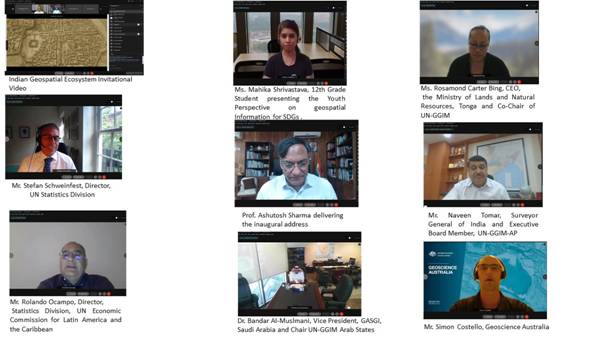 New Delhi: The Global Geospatial Information Community was sensitized about the second United Nations World Geospatial Information Congress (UNWGIC) to be organized by India in October next year, and their inputs are taken for designing the content of the event at a curtain-raiser held on 16 August 2021. The curtain raiser event was organized on the margins of the Eleventh Session of the United Nation Committee of Experts on Global Geospatial Information Management (UN-GGIM) to be held during the end of August 2021. “We are excited to host UNWGIC next year and looking forward to welcome all in Hyderabad next year for the event which would show a glimpse of India’s evolving geospatial ecosystem,” said Prof Ashutosh Sharma, Secretary of the Department of Science & Technology (DST), Government of India while inaugurating the event.

He spoke about the liberalized geospatial policy of India and its impact on strengthening the geospatial ecosystem. “We need to make the sector open to all stakeholders, reach benefits to urban as well as rural areas, and make geospatial information accessible to all. We are empowering our rural population through the “SVAMITA” scheme, through which a digital certificate of landholding is being given to rural landowners. As our Prime Minister says, our motto is “Sabka Sath sabka Vikas,” i.e., “No one should be left behind”, the core philosophy of the United Nations (UN) to achieve the Sustainable Development Goal (SDG) for which India is committed too.

The United Nation Committee of Experts on Global Geospatial Information Management (UN-GGIM) organizes the United Nations World Geospatial Information Congress (UNWGIC) every four years with the objectives of enhancing international collaboration among the Member States and relevant stakeholders in Geospatial information management and capacities. The first UNWGIC was organized by China in October 2018. The UNGGIM has entrusted the responsibility of organizing the second UNWGIC to India during October 2022. India will organize the event as a part of the “Azadi Ka Amrit Mahotsav (Celebration of 75 years of Indian Independence)”.

Mr. Stefan Schweinfest, Director, UN Statistics Division, endorsed the core theme of Second UNWGIC ‘Geo-enabling the Global Village’. Ms. Rosamond Carter Bing, Co-Chair of UN-GGIM, expressed her agreement saying that the theme will help in focusing on the empowering role of Geospatial information to common citizens. While inviting the global geospatial community to the 2nd UNWGIC, Mr. Naveen Tomar, Surveyor General of India, suggested four sessions for the same viz. Geodesy, High-resolution mapping for land administration, Advances in Surveying and Mapping. The eminent panelists from Latin America, Arab States, Australia, United States of America, The Netherlands, and Singapore, while expressing their suggestions for possible sessions during 2nd UNWGIC, emphasized on discussing strategy for implementing Integrated Geoinformation Framework (IGIF) of UN-GGIM and bringing out the societal value of geospatial information, especially for the disadvantaged sections and youth.