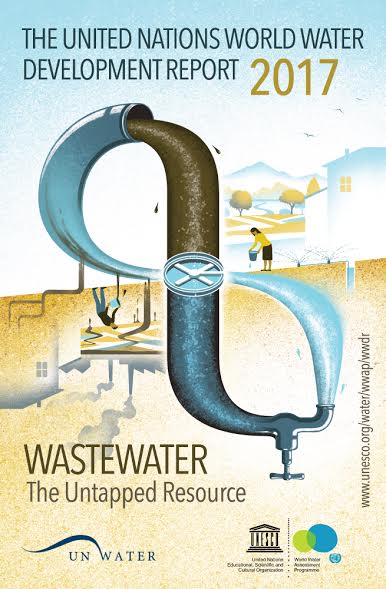 By Jayakumar Ramasamy
Wastewater is often an afterthought – flushed and forgotten – whether from household or commercial use. We may not know where wastewater ends up and we’re not too troubled by the mystery, just so long as it’s gone.
The 2017 United Nations’ Water Development Programme’s “World Water Development Report (WWDR) – Wastewater: The Untapped Resource” makes clear that we can no longer afford this disconnect.
The report, released today on World Water Day, notes that more than 80% of the world’s wastewater – over 95% in some least developed countries – is released into the environment untreated. In Thailand, 77% of wastewater was untreated in 2012, while the numbers were 81% in Viet Nam that year and 82% in Pakistan in 2011.
Untreated wastewater poses a threat to both human health and our aquatic ecosystems, and it is a challenge that is particularly acute in Asia-Pacific.
This region is in the midst of a profound urban shift that is straining its already limited infrastructure and capacity to effectively treat wastewater. As of 2009, an estimated 30% of urban dwellers in the region lived in slums, low-income areas where wastewater is often discharged into the nearest surface drain or informal drainage channel. Meanwhile, city-based hospitals and small- and medium-sized enterprises dump a slew of medical waste and toxic chemicals into wastewater systems.
Socioeconomic factors typically determine access to efficient wastewater management services that can more effectively deal with such pollution loads. Wealthier neighbourhoods are usually better served than slum areas, which are more likely to face the risk of contracting cholera, dysentery, typhoid and polio due to consuming faeces-contaminated water. However, even in countries with improved sanitation coverage, only 26% of urban and 34% of rural sanitation and wastewater services prevent human contact with excreta along the entire sanitation chain.
Along with the human cost, there are enormous economic stakes involved in the effective management of wastewater. The WWDR estimates that for every US$1 spent on sanitation, society benefits by an estimated US$5.5, and notes that “neglecting the opportunities arising from improved wastewater management is nothing less than unthinkable in the context of a circular economy.”
A circular economy is one in which economic development and environmental sustainability are interdependent, with a strong emphasis on minimizing pollution, while maximizing reuse and recycling. From this perspective, wastewater is an untapped resource of unparalleled potential.
When safely treated, wastewater can be a source of water, energy, nutrients and other recoverable materials that is both affordable and sustainable. The extraction of wastewater by-products such as salt, nitrogen and phosphorous has proven lucrative in Asia-Pacific. In Southeast Asia, revenues from fertilizer have paid for the operational costs of the systems to extract them several times over.
While wastewater management receives little social or political attention, water scarcity does. Last year, for example, the World Economic Forum stated that the water crisis would be the greatest global risk faced by people and economies over the next 10 years. The problem is particularly severe in Asia-Pacific – two-thirds of the world’s population are in areas that experience water scarcity for at least one month per year and about 50% of these people live in China and India.
The lack of attention and resources devoted to effective wastewater management ignores one of the most potentially effective means of addressing the global water crisis.
Singapore, for example, is using reclaimed water, branded “NEWater”, to serve up to 30% of its needs. While largely used for industrial purposes, the water is potable and demonstrates what can be accomplished through innovative policy approaches. The largely industrial use of NEWater also points to wastewater’s potential benefits for food production and industrial development.
More effective and efficient management of wastewater requires greater support of municipalities and local governments, which often lack the human and financial resources they need to enforce environmental rules and improve infrastructure and services. In terms of the former, businesses dumping toxins into local water systems often find it more cost-effective to pay fines rather than to modify their processes.
As we pursue the 2030 Agenda for Sustainable Development, the 663 million people around the world who still lack improved sources of drinking water put into perspective the urgency of our mission. Sustainable Development Goal (SDG) 6 specifically focuses on water and sanitation, with target 3 addressing water quality, but the availability of water is a cross-cutting issue upon which every aspect of development hinges. Put simply, water is life, and without a sustained commitment to improving and benefiting from effective wastewater management, that precious resource and the billions of lives it nourishes, are in peril.
Jayakumar Ramasamy is the Chief of UNESCO Bangkok’s Natural Science section.