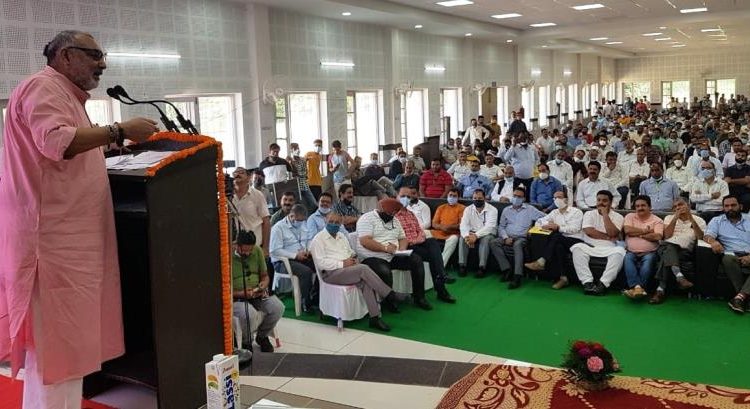 BILLAWAR : Union Minister for Rural Development and Pancahayti Raj, Sh Giriraj Singh has said the three tier Panchayati Raj system in Jammu and Kashmir will give much needed filip to the developmental pace as per the popular aspiration of people through their elected PRI representatives.

The Minister said this during his visit to Government Degree College Billawar in Kathua district under the ongoing Public Outreach Programme of the Central Government.

The Minister also handed over sixteen tractors and one tiller among the beneficiaries of different government sponsored schemes of agriculture and horticulture sectors.

He also gave away Ladli Beti Passbooks among the parents of enrolled girl child and track suits to adolescent girls under ICDS.

While speaking on the occasion, the minister said that Jammu and Kashmir has got functional District and Block Development Councils for very first time and the onus of development lies mainly with these PRI’s. He appealed elected PRI’s to make budgetary planning and allocation for development works as per the priority of their respective areas.

The Minister said initiatives like SWAMITVA are launched to provide an integrated property validation solution for rural areas which will bring transparency and will also facilitate monetization of rural residential assets for credit and financial services.

He said the benefit of High Density plantation in Jammu and Kashmir is now extended to the farmers having small land holdings which will open the income avenues for small farmers.

Later, the Minister also met the deputations of DDC’s, BDC’s, ULB’s, PRI’s and Civil Society and listened to their issues and demands.

The Minister assured the deputations that redressal of their issues will be taken up at appropriate forums.