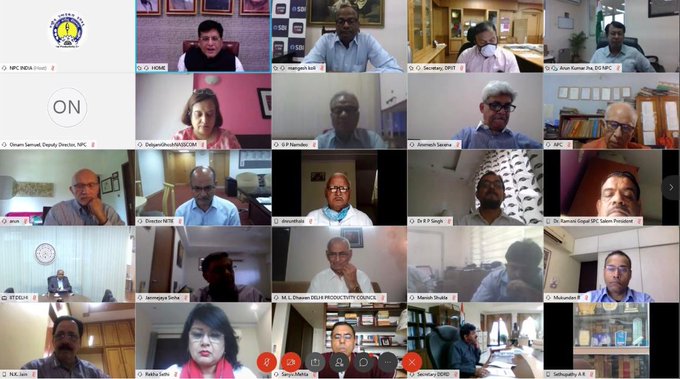 Governing Council Meeting of National Productivity Council held under the Chairmanship of Piyush Goyal, Minister of Commerce and Industry

Sheela Foam Ltd partners with NASSCOM for the ‘FutureSkills’…

uFaber steps up to bridge the gap for UPSC aspirants unable…

Shri Goyal, stressing upon the role of productivity in transformation of any organisation, said that coincidentally, today also marks Sh. Bankim Chandra Chatterjee’s 182nd Birth Anniversary as well as the MSME Enterprises Day. Quoting famous thinker Aristotle’s famous line “We are what we repeatedly do. Excellence, then, is not an act, but a habit”, Shri Goyal suggested that adoption of technology and digital economy is going to play a vital role in not only transforming the business enterprises in the future, but also in achieving the target of $ 5 trillion economy given by the Hon’ble PM. He appreciated the role played by the worker groups in nation building. Welcoming the wide array of suggestions received from the participants to vigorously pursue enhancing the productivity in all aspects of the industry and public offices, the minister reiterated the Paul J. Meyer words “Productivity is never an accident. It is always the result of commitment of excellence, intelligent planning and focused effort”.

The participants in the meeting endorsed the view that India can reposition itself only through productivity enhancement. Some of the suggestions made in the meeting were- sector formulation of specific action plans by NPC especially in agriculture and logistics sectors, identification of Champion sectors which has the potential to drive the economy, adoption of technology to increase the productivity and delivering cost-effective solutions for marginalised sector, interlinking of academia and industry for creation of a highly skilled labor force, financing of specific products to support MSMEs and increase their productivity, national audit on security impact etc . Shri Goyal suggested NPC to work closely with all the stakeholders and emphasised on adopting the best practices from around the world.

Sheela Foam Ltd partners with NASSCOM for the ‘FutureSkills’ Programme

RWTH: RWTH App “phyphox” is one of Germany’s ten…