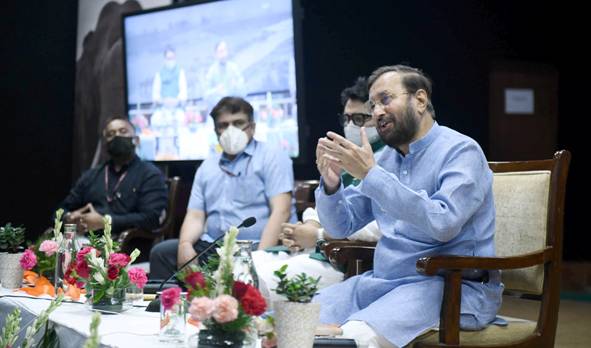 New Delhi: “Efforts are in full swing to provide food and water to the animals in the forests itself to deal with the growing human-animal conflict cases”, said the Union Environment Minister, ShriPrakash Javadekar on the eve of World Elephant Day at an event in New Delhi today.

The Environment Minister said thatIndia is committed to the cause of saving Elephants and other animals and is working towards robust, practical and cost effective solutions to end the Human Animal Conflict. Shri Javadekar stressed on the need of capacity building and training of forest staff.

“To manage conflicts and avoid loss of valuable lives of both the humans & elephants, it is important to strengthen the human-elephant coexistence”, said the Minister while releasing a booklet on “Best practices of Human-Elephant Conflict Management in India” during the event.

The booklet is a pictorial guide of a variety of management inventions successfully adopted by the elephant range states and serves as a reference manual for adoption of the best possible site specific mitigation measures that can be adopted to reduce human – elephant conflict.

Addressing the event, Minister of State in the Environment Ministry, Shri Babul Supriyo expressed satisfaction over the growing number of elephants in the country. He said, there is a need to save Elephants and deal with the Elephant-Human conflict firmly. He said, killing of innocent animals will not be tolerated by the Government and the Central Government is adopting the best practices to deal with human animal conflict.

During the event, Shri Javadekar and Shri Supriyo along with the officials of the Ministry also launched beta version of a portal on Human-Elephants Conflict. The National Portal on human elephant conflict called “Surakhsya” for collection of real time information & also for managing the conflicts on a real time basis will help to set the data collection protocols, data transmission pipelines and data visualization tools to enable policy-makers to leverage HEC data for policy formulation and for preparation of Action Plans for mitigation of conflicts. At present the beta version of the portal is being launched for data testing before the pan India roll out for adoption by the states, which is likely to be done before year end.

World Elephant Daycelebrated on August 12 is an international annual event, dedicated to the preservation and protection of the world’s elephants. The goal of World Elephant Day is to create awareness on elephant conservation, and to share knowledge and positive solutions for the better protection and management of wild and captive elephants.

Asian elephants are listed as “Endangered” on the IUCN Red List of threatened species. This has been done most of the range states except India, have lost their viable elephant populations due to loss of habitats & poaching etc. The current population estimates indicate that there are about 50,000 -60000 Asian elephants in the world. More than 60 % of the population is held in India.

Indian Elephant has also been listed in the Appendix I of the Convention of the Migratory species in the recently concluded Conference of Parties of CMS 13 at Gandhi Nagar, Gujarat in February 2020.Elephant is the Natural Heritage Animal of India and India also celebrates this day to spread awareness towards conservation of the species.

What Prevents People from Buying the Best Term Insurance Plan?