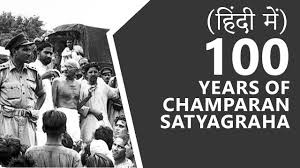 New Delhi: The Government has decided to commemorate centenary of Champaran Satyagraha during April 2017 to April 2018. A National Implementation Committee (NIC) has been constituted under the Chairmanship of the Home Minister. Inaugural function for the commemoration was organised in Delhi on 10th April, 2017.

Development of Gandhi Circuit in Bihar is one of the projects identified for development under the Special Package for Bihar announced by the Hon’ble Prime Minister in 2015. A project for “Development of Gandhi Circuit: Bhitiharwa-Chandrahia-Turkaulia under Rural Circuit theme of Swadesh Darshan Scheme” has been sanctioned in Bihar with Central Financial Assistance of Rs. 4465.02 lakh. A sum of Rs. 893.00 lakh, as first instalment, has been released by Ministry of Tourism.

This information was given by Dr. Mahesh Sharma, Minister of State for Culture and Tourism (Independent Charge) in a written reply in Lok Sabha today.

PM Narendra Modi invites ideas for his speech on August 15