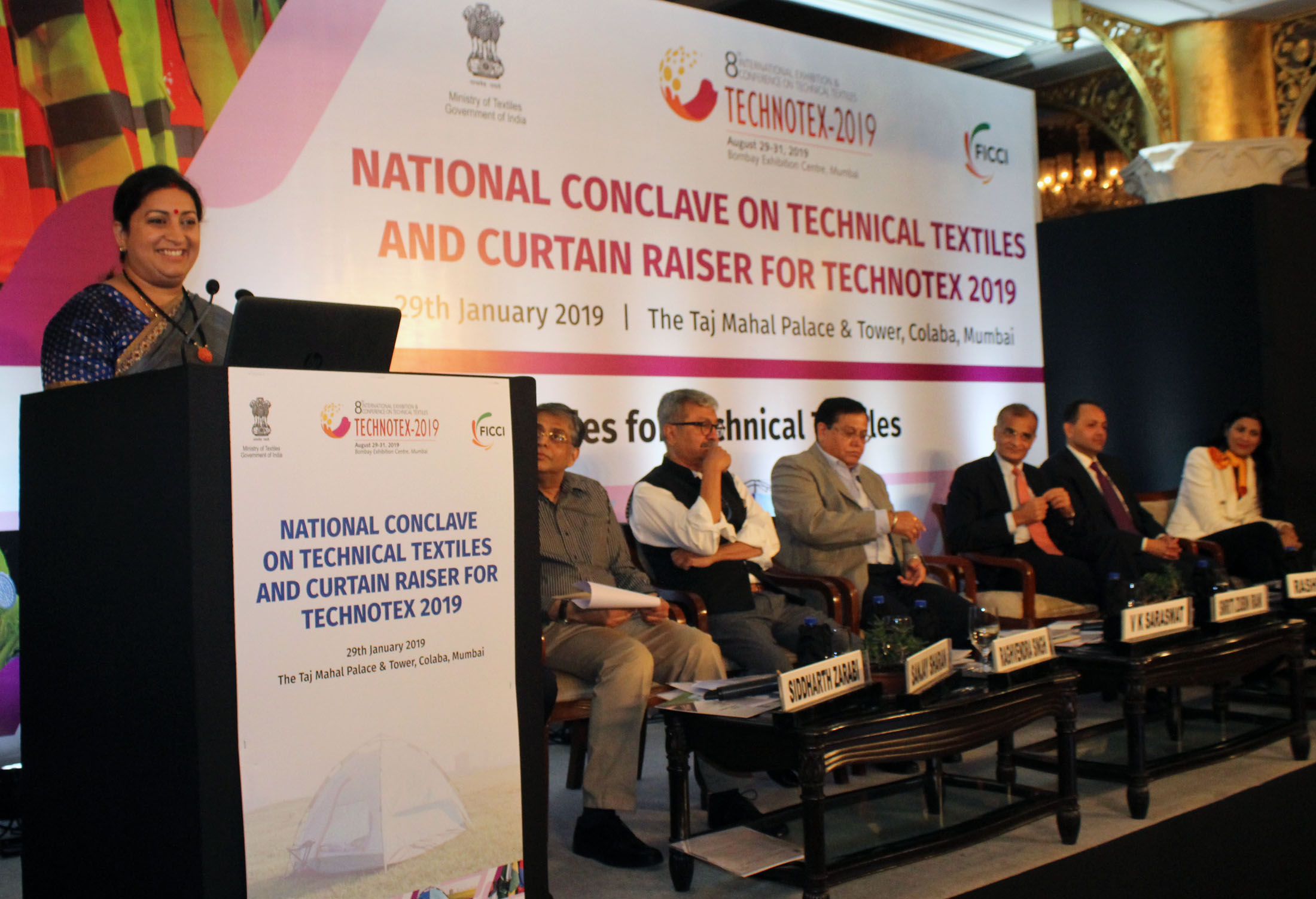 Mumbai: “Under the aegis of Ministry of Textiles, for the first time in the history of India, we have dedicated to the nation 207 HSN codes for technical textiles. I see this as a function of unleashing the potential of not only technical textiles but also of an industry which impacts both our farm life and our space pursuits. This decision alone can enable the sector to grow to a market size of 2 lakh crore rupees by 2020-2021”. This was stated by the Union Textiles Minister Smt. Smriti Zubin Irani, at the National Conclave on Technical Textiles, jointly organized by the Ministry of Textiles and FICCI, in Mumbai today. Stating that the notification is a milestone which is significant for the industry, the Minister thanked the industry who have guided and inspired the Government in this initiative.
To monitor the data of import and export and in order to provide any fiscal support to the technical textile sector, the first step was to recognize and notify separately the technical textiles items spread from chapter 1 to 99 of HSN classification book. In absence of clear classification of technical textiles, there was confusion and many genuine manufactures were not getting various incentives being allowed to technical textile sector by Central and State Governments. To fulfill the long-standing demand of industry to declare Technical Textile items as separate category, Government of India has notified 207 HSN Codes as Technical Textiles. This step will give a major boost to the Technical Textile sector in India and it is expected that this step of Government will act as a catalyst for achieving the Market Size of Technical Textiles up to Rs.2.00 lakh crore by 2020-21.

Speaking about the potential of agricultural textiles, the Minister said that it has been proven that the income of a farmer who uses agrotech goes up by 60% – 70%. She said that the contribution of agrotech is at the forefront of the Prime Minister’s desire to double farmers’ income. Technical textile industry can proudly say that we help those who feed us, said the Minister.

The job-giving potential of the technical textiles sector is huge; every Rs. 1 crore investment generates 70 jobs, said the Minister. She said that this will lead to growth in sectors such as research, education and facilities such as testing labs as well. Partnership between agrotech companies and Krishi Vigyan Kendras can be very impactful, noted the Minister. She cited a McKinsey Global Institute report, according to which application of agricultural technologies can help close to 90 million farmers by 2025.

Speaking of the historic initiative of Ayushman Bharat, the Minister said that the government is poised to unleash close to 1.5 lakh health and wellness centres across the country. These will be in need of medical textiles. Given standardization and need for quality control, our domestic manufacturers can compete and contribute to the medtech segment, said the Minister.

Underlining the steps taken by the Government for promotion of technical textiles, the Textiles Minister said that 530 prototype samples in technical textiles have already been developed within the sphere of the Ministry in the past four years; 8 Centres of Excellence have been set up at a cost of 140 crore rupees; 22,000 Indians have been trained in technical textiles in the past 3-4 years; about 650 conclaves and seminars at ground level have been organized; 11 incubation centres have been set up; 40 geotextile projects for roads, water reservoirs and slope stabilization have been undertaken; steps have been taken to ensure that farmers embrace agrotech through demonstrations at 54 agrotech demonstration centres; and kits have been distributed kits on using agrotech in day-to-day working.

The Minister informed that a committee has been constituted to give recommendations for R&D plan for the future growth of the technical textile industry and specifically for preparing a way forward for high performance specialty fibres in India. Noting that imported specialty fibres is one of our biggest challenges, Smt. Irani said that India is well-poised to ensure that the technology is affordable, we being the affordable innovators of the world.

Smt. Irani announced that an Innovation Centre for Technical Textiles will be set up at the national capital next month, with industry support. She said that steps like this can help us go beyond the 2 lakh crore target for the sector.

Wishing the best for the deliberations and debate for the day, the Minister hoped that the way forward that is determined the contribution during the Conclave will be a milestone not only for the technical textiles industry but also for the future of India and the Indian economy.

More than 200 industry and government delegates from various segments of technical textiles are attending the event.

Member, NITI Aayog, Dr. V K Saraswat addressed the participants and said that standardization of technical textiles products is important and notification of HSN Codes for these items was a major step in that direction. He emphasized that we need to encourage indigenous manufacturing of technical textiles and also check the import of sub-standard items.

Immediate Past President, FICCI, Mr Rashesh Shah said that the focus on technical textiles by Government of India complements well with the Prime Minister’s vision of New India where we are looking at the development of next generation infrastructure. Mr. Shah thanked the Textiles Minister for notifying HSN Codes for the 207 technical textiles items; he said it would help in giving due recognition to the sector.

Executive Director, Reliance Industries Ltd,, Mr Nikhil Meswani said that technical textiles is a fast growing segment globally, growing at 6% – at double the growth rate of polyester segment. It has the potential to achieve a size of US $ 34 billion in next few years in India and also achieve a growth of 20% per annum.

Also speaking at the programme was CEO & Jt MD, Welspun India Ltd., Ms. Dipali Goenka who highlighted the potential of technical textiles in India. India continues to be a bright spot in the world and is estimated to become the third largest economy by 2030; she said it can leverage its strength in fibres and yarns for the growth of technical textiles sector.