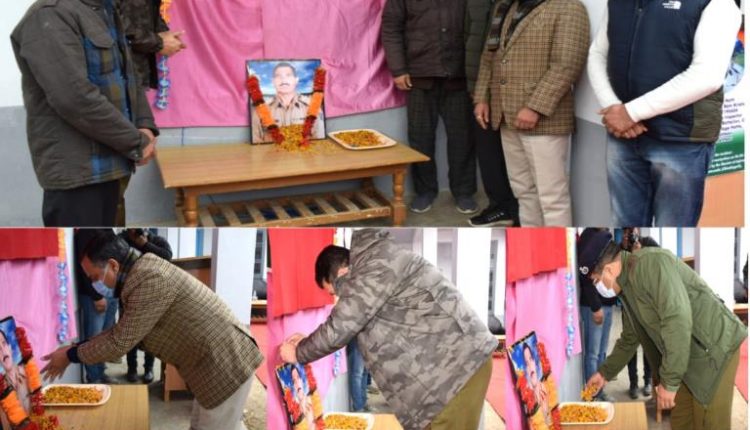 The school has been renamed after the Martyr Sub Inspector CRPF, Om Nath from Hatta village who laid his life during a blast at Injram, District Dantiwara of Chhattisgarh state.

The renaming ceremony was organized in the school premises in which Additional Deputy Commissioner Kishori Lal Sharma was the chief guest, while Senior Superintendent of Police Shafkat Hussain Bhat was the special guest.

The parents and family members of martyr Om Nath also participated in the function and expressed their gratitude to the government for this initiative.

Teacher High school Poochal, Sudeep Sharma presented the welcome address and highlighted the achievements of the martyr and the story of his martyrdom.

Speaking on the occasion the ADC said that it was a proud moment for all those present and hoped that the students will be motivated to serve the nation.”

A brief history of the martyr was also written on the wall.

During the programme, SSP Kishtwar announced that all government schools in Jammu are being named after martyrs of Indian Army personnel, CRPF jawans and Jammu and Kashmir Police personnel.

He said it is a great tribute to all those who have laid their lives for the nation.

Later, Vote of thanks was presented by Headmaster Shambu Nath ji. He thanked all the dignitaries, family members of Martyr Om Nath & other people present on the occasion.