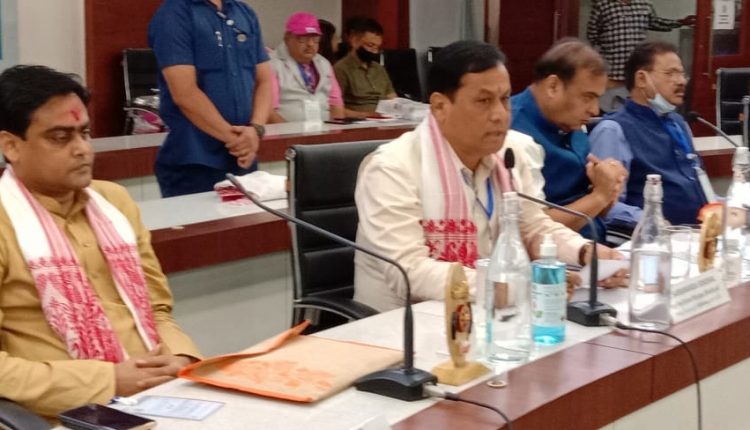 New Delhi: Union government is working hard to make Northeast a growth engine of the country, and the region is taking speed on the path of development said Union Minister of Ports, Shipping & Waterways and Ayush, Shri Sarbananda Sonowal while addressing the Stakeholder Conclave on Waterways as Engine for growth at Guwahati today.

Addressing the forum, Shri Sonowal said that Union government is giving topmost priority to Northeast zone. He asserted that since 2014 the Prime Minister of India is working for the growth of the country with a special focus to Northeast region. He further said that now focus is given to the waterway connectivity in the region as a result Mongla and Chittagong ports are now accessible to us. He urged the stakeholders from across the Northeastern zone to take advantage of the conclave and priorities which products from this region can be exported to foreign countries.

Union Minister of State for Ports, Shipping & Waterways Shri Shantanu Thakur said that shipping ministry is taking initiatives to develop and use water resources and waterways for the economic development of the northeast zone.

On this occasion Chief Minister of Assam, Shri. Himanta Biswa Sarma said that this conclave is platform to get an idea how water resource can be used for economic growth and sharing of ideas through this kind of interactions can help the people of Northeast zone in getting the market for their product.

Govt. of India has allocated $4 billion to the support of…

Shri Chandra Mohan Patowary, minister of Industries and Commerce, Transport and Skill development thanked Shri Sarbananda Sonowal for organizing such conclave in the state and taking initiatives for the development of waterways in NE zone.

The Ministry of Ports, Shipping & Waterways is also taking initiative to promote river tourism and water sports along Brahmaputra, Ministry has identified 7 tentative locations (Oriumghat, Bhupen Hazarika Setu, Koliabhomora Bridge at Tezpur, Bogibeel Bridge, Dikhow Mukh, Kalongmukh and Uzanbazar) for development of tourist jetties. Construction of tourists’ jetties will facilitate river cruise tourism, generate local employment and also growth for local business. These jetties would be in addition to the four tourist jetties at Jogighopa, Pandu, Neamati and Bishwanath Ghat, which have already been approved.

This Government declared 20 waterways as National Waterways in 2016. The ministry has initiated work on NW 2 (Brahmaputra) and NW 16 (Barak) as more waterways are considered for development. The Indo Bangladesh Protocol (IBP) route developed jointly by India and Bangladesh at an estimated cost of Rs 305.84 crores to provide an alternate connectivity for all North-eastern states from Guwahati and Jogighopa to Kolkata and Haldia ports. The Sirajganj-Diakhowa (175 km) on River Jamuna and Ashuganj-Zakiganj (295km) of river Kushiyara on the IBP routes are being developed to connect with River Brahmaputra and River Barak (NW-16) in Assam. The development of an Eastern Grid – which will have Brahmaputra and Barak rivers along with Ganga and Sundarbans – will work as a catalyst to boost regional integration and trade with South Asia and Eastern South Asia; including Myanmar and to further, potentially countries like Singapore, Malaysia and Thailand.

Govt. of India has allocated $4 billion to the support of the pharmaceutical and…

Vision is to position Mizoram as a safe and sustainable tourist destination in India:…