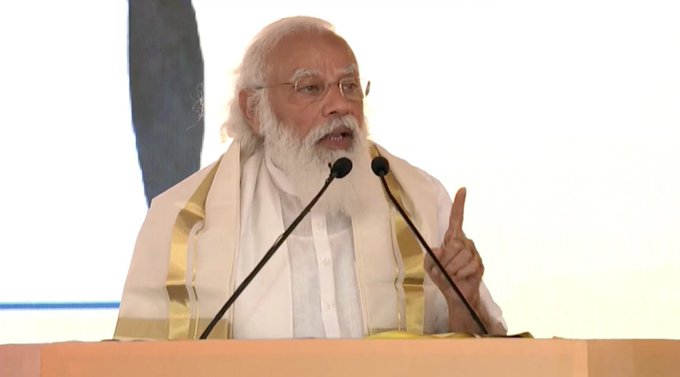 Speaking on the occasion, the Prime Minister said that the works inaugurated today cover a wide range of sectors.They will energise the growth trajectory of India. He said that Propylene DerivativePetrochemical Project (PDPP), inaugurated today, will help strengthen India’s journey towards being Aatmanirbhar as it will save foreign exchange. A wide range of industries would gain and employment opportunities would be generated. Similarly, with Ro-Ro Vessels, a distance of almost thirty kilometres on road will become 3.5 kilometers through waterways leading to less congestion and more convenience, commerce and capacity-building.

The Prime Minister asserted that the Government of India is undertaking many efforts to improve tourism related infrastructure in Kerala.The inauguration of Sagarika, the International Cruise Terminal in Kochi is one example of this. Sagarika Cruise Terminal will cater to over a lakh cruise guests. The Prime Minister noted the rise in local tourism due to pandemic related restrictions on international travel. He said this is a great opportunity for added livelihood to those in the local tourism industry and deepening of connection between our culture and our youth. He called upon start-ups to think about innovative tourism related products. The Prime Minister noted the tourism sector in India has been growing well in the last five years.In the World Tourism Index ranking, India moved from sixty fifth to thirty fourth position, said the Prime Minister.

Prime Minister said capacity building and future ready infrastructure are two important factors for national development. Today’s development works of ‘Vigyan Sagar” and reconstruction of the South Coal Berth will contribute to both these factors. Vigyan Sagar, the new knowledge campus of Cochin Shipyard would particularly help those wanting to study marine engineering. South Coal Berth would bring down logistics costs and improve cargo capacities. The Prime Minister emphasized that today, the definition and scope of infrastructure has changed.It is beyond only good roads; development works and connectivity between a few urban centres.Through the National Infrastructure Pipeline, Rupees 110 lakh crore is being invested for infra creation, the Prime Minister informed.

Outlining the country’s plan for development of the Blue Economy, Shri Modi said “our vision and work in this sector includes: more ports, improving infrastructure in current ports, ff-shore energy, sustainable coastaldevelopment and Coastal connectivity”. Talking about the Pradhan Mantri MatasyaSamapadaYojna, the Prime Minister pointed out that it caters to diverse requirements of fishermen communities. It has provisions for ensuring more credit.Fishermen have been linked with Kisan Credit Cards.Similarly, work is underway to make India a hub forsea-food exports.

The Prime Minister said that this year’s Budget has devoted significant resources and schemes that will benefit Kerala.This includesthe next phase of the Kochi Metro.

Referring to India’s spirited response to the Corona challenge, the Prime Minister recounted the Government’s effort to help Indian diaspora specially in the Gulf. He said India is proud of its diasporain the Gulf.As a part of theVande Bharat Mission, over fifty lakh Indians came back home. Many of them were from Kerala. The Prime Minister took the opportunity to thank various Gulf Nations for their sensitive approach to the government of India’s effort to get released many Indians who were in prisons there. “Gulf kingdoms responded to my personal appeals and took special care of our community. They are giving priority to the return of Indians to the region.We have set up air bubbles to facilitate that process. Indians working in the Gulf should know that the full support of my Government is there to ensure their welfare” said the Prime Minister.

New apprentices join scheme to launch their careers in technology

Government has always taken care of the welfare and aspirations of our Tamil brothers and sisters in Sri Lanka: PM Narendra Modi