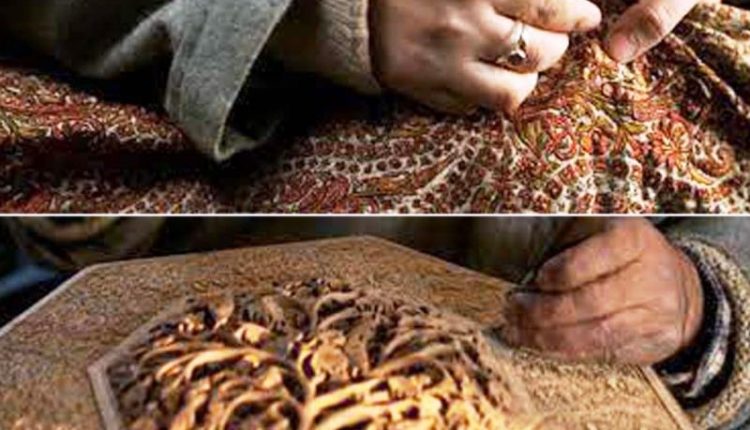 SRINAGAR : In a significant development, the Government today issued orders for giving a fresh impetus to the training in handicraft sector in the UT by unveiling the ‘KARKHANDAR’ scheme which is a unique concept as far the upliftment of artisans and weavers through training is concerned.

The scheme will be implemented throughout the UT by Directorate of Handicrafts and Handloom Kashmir/ Jammu.

Speaking on the development, Director Handicrafts and Handloom Kashmir, Mahmood Ahmad Shah, termed this a landmark decision that will give a fresh lease of life to the craft scene of the UT and especially to the languishing crafts .

The Director also said that the scheme will not only boost those crafts which have good potential but also the languishing ones. Among the languishing crafts the crafts like Glazed tiles, Silver ware and filligree will be taken on for full revival in the first instance, he added.

The manpower generated through various training programmes by the department in the form of trainees will now get an edge as the trainees will get training from the experienced trainers in nearby karkhanas and those trainers now can be National/ State/ Shilp Guru awardees/ Master crafts person of repute in their respective crafts.

The main thrust of the scheme shall be to identify and impart skill upgradation training in such crafts which are facing human resource crunch like walnut wood carving, silver filigree, carpet, kanishawl weaving, khatamband and Paper Machie crafts.

Under the scheme the meritorious trainees will be given RS 2000/month as honorarium and the trainer will get Rs 2000/month for each trainee and plus Rs 25000/- for logistics, raw materials etc.

By virtue of this scheme, the practical knowledge sharing between the skilled and those who who want to equip themselves in the practical aspects of the particular trade will happen at a fast pace and in a time bound manner.

This scheme is in addition to some already launched major schemes that include Artisan Credit Card Scheme and Scheme of Financial Assistance to the Cooperatives for the artisans and weavers of the UT.

iednewsdesk May 20, 2022
Numerous RWTH employees were honored at the RWTH Guesthouse for 25 or 40 years of service to the University. RWTH…