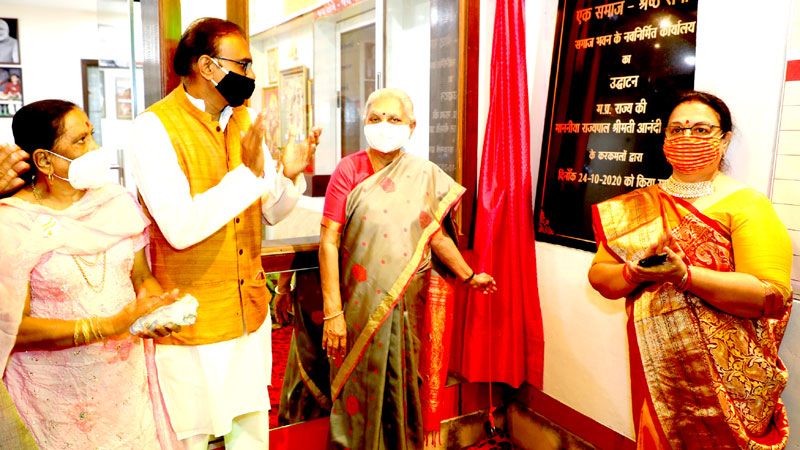 Bhopal : Governor Smt. Anandi Ben Patel has said that Gujarati Samaj is such, that wherever it goes, it takes along its culture. They celebrate all their festivals and ceremonies with much enthusiasm and zeal. Wishing everyone in advance for the coming Diwali festival and New Year, she wished happiness and prosperity to all families. She called for everyone to resolve to defeat Covid-19 and become united and virtuous (Ek Bane, Nek Bane). Smt. Patel was addressing people at the inauguration of the new office of Gujarati Samaj. Earlier,the Governor also took part in the aarti of Durga Ashtami Pujan organized by the Samaj.

Governor Smt. Patel said that in the initial phase of Covid-19 infection, all families stayed indoors, which helped the family members to strengthen their feelings of respect and affection for elders. Feeling of love for each other and assistance has grown in the family. She said that we all should be grateful to the doctors, nurses and all Corona warriors. We should respect those who have risked their lives and worked continuously for us.

Smt. Patel said that every person in the society should come forward for empowerment of women and meritorious children. Citing the example of Padmashree Phulbasan, daughter of Chhattisgarh, who was a participant in Kaun Banega Crorepati, the Governor said that Phulbasan was an illiterate woman who used to graze cattle. She has connected and empowered about two lakh women. She said that all of us should take inspiration from her. If an illiterate woman can do such a big job, then all of us should also try at our own levels.

The Governor said that such efforts can bring big changes in the society. She said that I am happy that the Gujarati Samaj and the resident families of Raj Bhavan campus participated in the garba organise at Raj Bhavan with enthusiasm and zeal.

At the outset, the President of Gujarati Samaj, Shri Sanjay Patel welcomed the Governor and thanked him for inviting the Samaj for Garba at Raj Bhavan.

UNSW Art & Design researchers will present an experimental history at the Know My Name Conference.