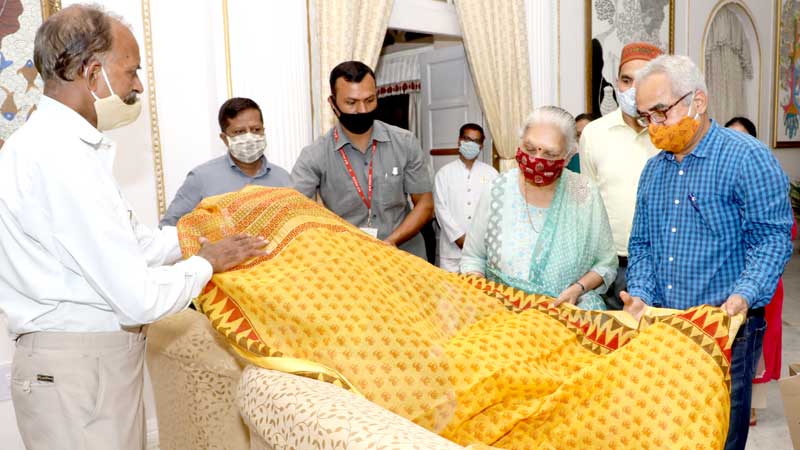 Governor Smt. Patel eagerly watched the new designer series of Chanderi Maheshwari and appreciated craftsman Shri Vinod Malevar for his ten years of hard work. Commissioner Handicrafts and Mrignayani Managing Director Shri Rajeev Sharma informed the Governor about the upcoming heritage collection Sanchi Stupa series of the Corporation. He informed that the Bhimbetka collection has been presented by Mrignayani in memory of Archaeologist Shri Vishnu Shridhar Wakankar. Along with this, cotton angavastram is also being prepared in the series. The average price of sarees ranges between Rs 3500 and Rs 8000. Similarly, Angavastrams have also been prepared, the prices of which range between Rs 700 to Rs 1500. In the next phase, women’s suits and yardage will also be made under this series. The products of the series are available at GTB Complex in Bhopal.

Initially, the Governor was welcomed by the Principal Secretary Village Industries and Commissioner Handicrafts with bouquets. General Manager Shri Mahesh Gulati proposed the vote of thanks. On this occasion, the first customer of Bhimbetka, Shri Manoj Singh Meek, was handed over the first sari of the series by the Governor.

There will be no shortage of funds for development: CM Chouhan

Full honour and respect to ‘Rashtra Bhasha’ in Madhya Pradesh